Cassopolis teachers getting grades this year 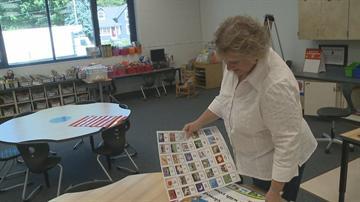 CASSOPOLIS, Mich. – Teachers will have pressure this school year in Cassopolis to keep their grades up.

Thursday morning the State of Michigan announced that Cassopolis Schools will be one of a handful of districts piloting a teacher evaluation program. The state is trying four programs to prepare for statewide teacher evaluations going into effect next year.

In July 2011, controversial teacher tenure reforms were signed into law by Governor Rick Snyder. The laws call for a universal evaluation method of Michigan’s teachers and the reforms will make it easier for districts to eliminate teachers that underperform.

Donna Warren, a 27-year Kindergarten teacher at Sam Adams Elementary School in Cassopolis, spend Thursday afternoon emptying boxes and setting up her room for the upcoming school year. This year, plenty of things will change, but she said the students will not. “They grow so much in Kindergarten,” she said.

The new teacher evaluation program being installed at Sam Adams will make sure Warren’s children do grow. All 55 teachers in Cassopolis Schools will be under a microscope this year and will end with one of four grades.

The program, one of four pilots being installed in 14 Michigan schools, will test children several times throughout the year with both written and computer based exams. The tests will measure growth in each student. The tests along with administrative observation in each classroom will determine which teachers make the grade and which do not.

“We want the best for our children,” said Hertsel. He said Cassopolis was willing to be a pilot district to be ahead of the curve. Next year every district in Michigan will use the same program or a similar version of the program.

Teachers that are dubbed ‘ineffective’ will be on probation for one year and could face termination if signs of improvement aren’t shown. “If they’re not doing their job maybe they need to find another occupation,” said Hertsel.

“That’s our goal every year anyway,” said Warren. “To get a student from ‘Point A’ to ‘Point B’.”