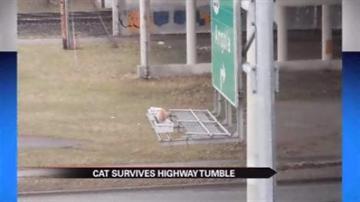 SOUTH BEND, Ind. -- They say cats have nine lives and it appears that could be true!

One lucky cat narrowly escaped with his life after being tossed over a highway overpass.

Animal control officers say the animals they rescue have remarkable stories and many times cruel ones. Today was no exception.

Meet Freeway. The cute feline earned the name after Elkhart Animal Control officers found him along the bypass, curled up on a highway sign 25 feet in the air.

"Freeway was definitely in a tight predicament," says Elkhart Animal Control officer Don Ely. "He is one of the luckiest cats I have ever seen."

From the over pass down to the sign, it is 25 feet. The sign is another 15 feet out from the ledge.

Animal control says there is only one way a cat could get there.

"There is only one logical explanation. He was tossed from the top and actually landed on there," says Ely.

Tossed out like a piece of trash, Freeway clung to the sign for nearly two days before he was discovered and then rescued.

"That's pretty cruel. It's pretty cold that somebody would do that and the chances of him landing on that sign were 100 to one odds that he would land on it," says Ely.

Luckily, a driver spotted the cat and called the Humane Society. Ely says, in most cases they are too late, which is why Friday was even more extraordinary.

"That's one of the reasons why I took this job," says Ely. "This is one of the chances I get to prove to myself that I am doing something good out there."

When they got Freeway down from the sign he had nothing but a small scratch on his leg. Now, in a matter of days, he will be ready for a new home.

The Elkhart Humane Society is asking that anyone with information that could lead to an arrest to contact their office.