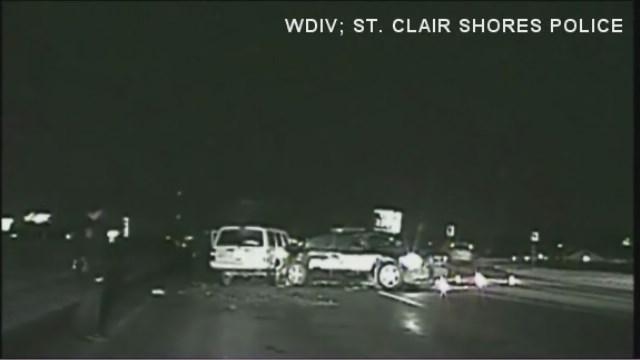 Two police officers were nearly killed when a car lost control on an icy Michigan highway - and it was all caught on camera.

The driver of a Jeep, going way too fast for conditions, plows into the patrol car, nearly crushing Stachel.

"One of my co-workers is actually trying to stop the car. He's throwing his hands up and then when that didn't work he turns around and yells, 'Look out!” said St. Clair Shores Police Officer Jason Stachel.

With his adrenaline pumping, Stachel first checks on the driver of the jeep, a younger driver whose first words were- his dad was going to kill him for crashing his jeep.

Once he realized the driver was ok, the reality that he could have been killed sets in.

"Both myself and my partner ran up to the car to see if the driver was OK. I didn't even think about myself until 10-15 minutes later when my partner says, 'You almost died.' That's when you start to think about things,” said Stachel.

As the monster wreck on I-94 near Battle Creek showed everybody, you can lose control in an instant if you're' going too fast and not paying attention to conditions

"Pay attention to the conditions of the road. If you see a lot of cars with brake lights on, there's probably a reason -- there's something going on up ahead. Everybody is in a hurry to get where they want to go but that three minutes could have been a life somewhere,” said Stachel.

On the same day, an MSP trooper was hit twice on the same night. The trooper is okay.