Cavemen ready to take on Minutemen 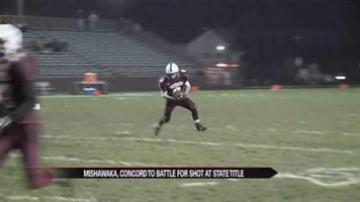 MISHAWAKA, Ind. -- Three local teams are vying for a chance to play at the state championship at Lucas Oil Stadium next week.

Mishawaka and Concord will do battle at Jake Field on Friday to play for the Class 4-A title game.

Both teams have been playing their best football of the season as of late.

And Cavemen head coach Bart Curtis said his team has its work cut out for them.

"We gotta take care of the football. We gotta try and manage their big play potential,  which nobody has been able to do," Curtis said. "They can throw the ball over your head. They can catch it. They can run it. They can block you a lot of different ways. They can hurt you a lot of ways, so that's key."

The winner will take on either Indianapolis Cathedral or undefeated Columbus East in the 4-A State Championship next at Lucas Oil Stadium next Saturday.