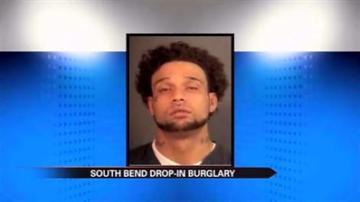 SOUTH BEND, Ind. –- One arrest has been made in the burglary a store on Ireland Road in South Bend. Police say the suspect entered the store by climbing into the ceiling of an adjacent store and crawling to Joe’s Gold.

When thieves struck at Joe's Gold on Ireland Road in South Bend over the weekend, they likely didn't want to draw attention to themselves.

"They used a back door and crawled through the ceiling,” said store manager Tina Young.

Eventually, they broke through the ceiling and dropped into the store.

They kicked in the office door, grabbed what they could and ran out the back door.

But – they dropped stolen coins while they ran, leaving an easily followed trail behind.

ABC57’s stumbled upon one of the coins and its case at the scene and pointed it out to detectives. It was gathered as evidence.

One arrest has been made. Jeremy Griffin was arrested at the bar next to the store shortly after the break in.

Witnesses claim to have seen Griffin coming out of one of the vacant stores next to Joe's Gold covered in insulation.

Insulation was also found in the bar’s bathroom.

"When the police came in looking to see if anybody saw anything, they pointed him out and they arrested him. It was hysterical,” said Joe Hunt, owner of Joe’s Gold.

"Next to having video surveillance, you can't get much better than that,” said Young.

It also doesn't hurt to be one step ahead of the criminals.

"There is always a backup plan in a business like this.  We knew from a few nights prior that another business had this unfortunate experience,” said Young.

So Hunt moved all his most valuable items to a more secure location. He left behind a few half dollar coins.

"They didn't see this coming. It was almost like a trap. They walked in, there was nothing for them to take. It was like they broke in for nothing and their friend went to jail,” said Hunt.

Right now police are still investigating the break in. They believe griffin was not working alone.