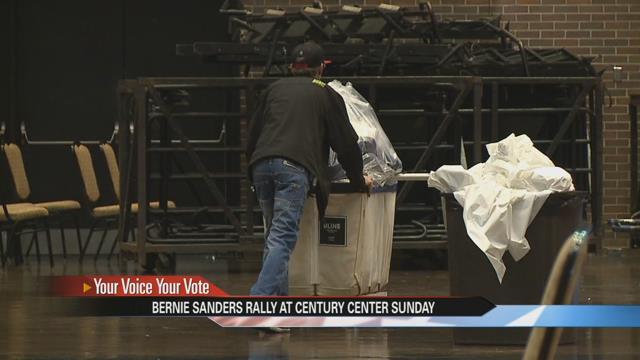 With campaign rallies for both Bernie Sanders and Donald Trump expected to bring in thousands, the staff at the Century Center in South Bend has been busy preparing.

General Manager Leanna Belew says between four to six thousand people are expected to show up at Sanders’ rally on Sunday. Around fifteen thousand are expected for Trump on Monday.

The Century Center hosted around 800 people for Ted Cruz's rally on Thursday.

Belew says the venue has accommodated a lot of people before but not with such short notice.

“The biggest challenge is that it’s so last minute. A lot of our events that we have we know a year in advance that we are going to be having this kind of crowd,” said Belew.

In addition to extra staff and extra hours of preparation—lots of extra precautions to keep everyone safe.

“We are working very closely with the South Bend Police as well as the Secret Service have been here and they’re working in tandem as well,” said Belew.

Sanders' campaign rally is open to the public on a first come first serve basis, you can RSVP here. For tickets to Trump's rally click here.