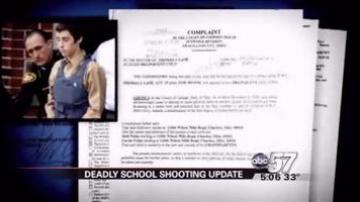 CHARDON, OHIO.—New information on the 17-year-old gunman who police say opened fire on students at Chardon High School in Ohio has been released.

Juvenile court records show that back in 2009, T.J. Lane was accused of choking and punching another boy.

He later pleaded guilty to disorderly conduct. Thursday, he was charged as a juvenile with three counts of aggravated murder.