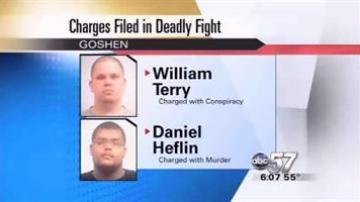 GOSHEN, Ind. -- On Wednesday, charges were filed against two men accused in a deadly fight in Goshen!

24-year-old William Terry is charged with conspiracy to commit murder.

21-year-old Daniel Helfin is charges with murder and attempted murder.

Two others are also charged with perjury.

26-year-old John Staub died last Thursday after he was shot in the chest.

Another man was shot in the leg.