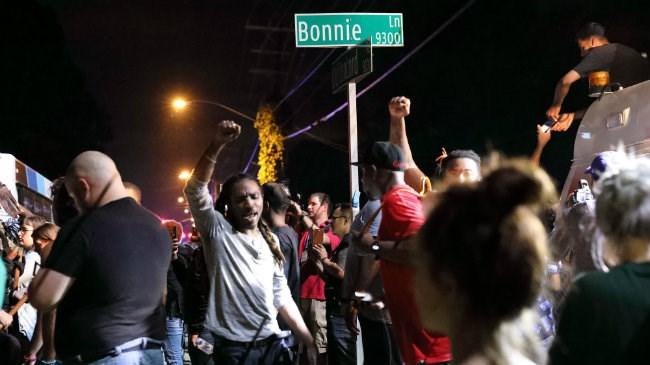 CHARLOTTE, North Carolina (CNN) -- After violent protests raged for the second night in Charlotte over the police shooting of a black man, the city's police chief told reporters Thursday he has no intention of releasing dashcam video of Keith Lamont Scott's shooting "to the masses."

Asked whether there was a time at which the public could expect to see it, Chief Kerr Putney said there should be no such expectation.

"Transparency's in the eye of the beholder," he said. "If you think we should display a victim's worst day for public consumption, that is not the transparency I'm speaking of."

Putney warned that video will not provide "definitive visual evidence" that Scott pointed a gun at police officers. But other evidence and witness accounts support the police narrative that officers opened fire only after Scott refused to drop his weapon, he said.

Justin Bamberg, an attorney for the family of Scott, who was fatally shot by Charlotte police officer Brentley Vinson, said Scott's relatives viewed the footage Thursday evening at Charlotte-Mecklenburg police headquarters. He would not comment on the family's reaction.

Scott didn't own a gun or habitually carry a gun, the family has told their attorneys, Bamberg said.

At the request of Scott's family, Mecklenburg County District Attorney R. Andrew Murray has asked the State Bureau of Investigation to investigate Scott's death, according to his office. State law requires the prosecutor to reach out to the bureau if the family requests it.

Putney also used the news conference to send a message to those who would continue looting and destroying property in the city, which resulted in 44 arrests and injuries to nine civilians and five police officers: "We're not going to tolerate the behavior."

Two of the officers suffered minor eye injuries, while three others had heat-related ailments.

Wednesday's protests began peacefully, the chief said, but about 8 p.m. demonstrators began jumping on cars and damaging property at EpiCentre, an entertainment hub uptown. Police were forced to deploy tear gas, he said, and as the night went on, protesters shut down Interstate 277 and the city's light rail was halted just before midnight, due to the demonstrations, Putney said.

The violence and vandalism carried on until roughly 3 a.m., he said. The arrests ran the gamut from failing to disperse to assault to breaking and entering, and more arrests may come as authorities review video footage of the protests, he said.

Those looking to repeat the tumult will do so under an increased police presence Thursday night. There will be officers on foot and bike patrol, as well as dirt bikes. Helicopters will patrol the streets from above, and police will have more than 1,000 cameras to help monitor the city, Putney said.

The National Guard and state police will protect buildings and infrastructure so the Charlotte-Mecklenburg police can "focus on the people who are committing crimes, who are damaging property and assaulting our people," he said.

Guard troops were seen arriving Thursday afternoon and the state was in the process of activating 316 troops for security and crowd control.

What's on the video?

Mayor Jennifer Roberts previously told CNN she will review both dashcam and body camera footage of the Scott shooting sometime Thursday. (Officer Vinson, the black officer who shot Scott, was not wearing a body camera, Putney has said.)

While the public shouldn't expect to see the video, Todd Walther, spokesman for the Charlotte Fraternal Order of Police, told CNN that he viewed the footage, and it demonstrated Scott was "an obvious threat" to police officers. He said Scott can be seen with a gun and ankle holster in the video.

Scott was in a vehicle when police arrived to serve a warrant on another man at an apartment complex, he said. Some of the officers were not in uniform, but they still had vests or jackets that said "police" on the front and back, Walther said.

"He was seated in (the car) when he was approached, but when he exited that vehicle, he was given clear commands to drop the weapon -- and he did not do that," Walther said. "So he was armed when he came out of that vehicle and refused to listen to officers."

Scott's family has said he was reading a book in his vehicle when police officers approached and shot him. But Putney said Scott was armed and no book was found at the scene.

Moments after her father was shot, Lyric Scott started recording on Facebook Live, screaming at officers on the scene.

"They shot my daddy 'cause he's black," she said. "He was sitting in his car reading a mother******* book. So they shot him. That's what happened."

North Carolina recently passed a law that blocks the release of police recordings from body or dashboard cameras with limited exceptions, but that law is not set to take effect until October.

"Technology like dashboard cameras and body cameras can be very helpful, but when used by itself technology can also mislead and misinform, which causes other issues and problems within our community," Gov. Pat McCrory said after signing the bill into law in July.

The perceived lack of transparency has fueled widespread anger in Charlotte, prompting McCrory to declare a state of emergency overnight.

One man was in critical condition at Carolinas Medical Center after being shot Wednesday night by another civilian during the unrest, Putney said. The victim was discovered at the Omni Hotel uptown, and because the crowd was too thick for paramedics to access the scene, had to be evacuated by a SWAT armored personnel carrier, he said.

The mayor previously told CNN she would consider options such as a curfew if the protests continue, but Putney said he could not say for sure the city would institute one.

"It's just going to depend on what we see," he said.

While there were instances of peaceful demonstration throughout the city, some protesters overturned trash cans and set the contents on fire Wednesday night.

Onlookers cheered as a masked man shattered a hotel window while another one hurled rocks through it. Others spray-painted "Black Lives Matter" on business facades and smashed car windows.

"I was right in the thick of it," witness Zach Locke said. "People found whatever objects they could to break glasses. It was madness."

Stores were looted, and freelance photographer Marcus DiPaola told CNN he saw people knock over an ATM and grab money from it.

Not all the protests were violent.

Kristine Slade, 19, a University of North Carolina at Charlotte student, joined the protests Tuesday night, kneeling in front of a police line with her hands up in the air. She said she felt like she had to protest, because "if nobody else is going to do it, then we're still going to be in the same position."

But she became increasingly worried Wednesday night as she saw rocks being thrown, fires being set and acts of vandalism committed. She left early when police tried to disperse the crowd.

'That's not the answer'

Protester Roy Pegram told CNN that looting and violence is "never the right thing," but authorities need to understand from where the anger stems.

"People are getting away with murders, and we just want to know why they're getting away with them," he said. "Why does it automatically go to shoot instead of talking (a) person into putting a gun down if he had one, whatever? ... Instead of trying to talk with him and trying to get the problem resolved, went right to the trigger. That's not the answer, to go right to the trigger. It's to try to talk the person into, if he did have the weapon, to put it down."

The protests erupted amid heightened tensions over police-involved shootings, including last week's death of Terence Crutcher, an unarmed black man in Tulsa, Oklahoma. Protesters across the country have been demanding justice and an end to police brutality for months.

"We don't have leadership that this crowd can relate to," Albright said. "We know how to protest and have our voices heard in a civilized way, but who is going to teach the younger crowd? Church leaders need to get out there and tell these kids that this is not the right way."