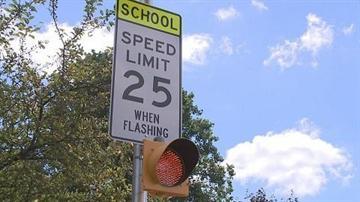 Xavier School of Excellence is nestled between two of South Bend’s most heavily traveled thoroughfares Michigan Street and Main Street; and that is causing safety problems for students getting to and from the school.

A small number of students live close enough to walk to school, but to get home they have to cross these busy streets. With no crosswalks in front of the school, and no crossing guards to see them across the three lanes of traffic, kids are put in a dangerous position.

The danger of crossing Michigan Street is compounded because part of the road is obscured when viewed facing south into oncoming traffic. As vehicles approach the school from the south, the road rises up the hill and they can be seen again just before they pass in front of the school.

The Main Street side of the building is a whole other problem.

Currently, parents pick up students in the parking lot on the Main Street, or west side, of the building. But the lot is small and cannot accommodate the large number of parent vehicles.

That has parents lining up to the north along Main Street, so they can turn left into the lot when it is their turn. It is causing a big problem.

Because parents are being forced to exit the parking lot at the same entrance, vehicles trying to get back onto Main Street cannot see oncoming traffic. This has already caused several near accidents.

The school felt adding flashing caution lights to Main Street and Michigan Street would help solve some of these problems.

The deal was, the city would put in the flashing lights on Main Street, and the charter school would pay the $8,000 for the lights on Michigan Street.

Recently, the city made good on its end of the deal and put up two poles, each with two flashing lights, a speed limit sign, and a sign indicating a school was nearby.

Parents and administrators were ecstatic to see the city following through; but what about the lights on Michigan Street?

The school’s director Tania Grimes, a former Indiana Teach of the Year, says they don’t have the money for the lights. “Unfortunately, with all of the budget cuts in education and things like that, my school just does not have $8,000,” said Grimes.

Grimes and several others showed up at the last public meeting of the South Bend Common Council to thank them for installing the flashing lights on Main Street, and to ask them to also take care of them on Michigan Street.

Knowing the deal that was struck last year, council president Derek Dieter visited the school the next day. After seeing these situations with his own eyes, he and Grimes worked out a new deal. “We’ve come to an agreement with them,” said Dieter.

The new deal calls for the school to pay a fraction of the originally agreed to cost. “If we can come up with 10 percent of the money, which would be $800, the city will try to come up with the rest,” said Grimes.

To accomplish this, Grimes and the charter school’s accountant made cuts to the technology, salary and benefits, and school supply budgets. “We had to go in a lot of things and see where we could trim some things back, just to meet our operating costs, and to fund things that are of vital importance, like safety issues,” said Grimes.

But even if the warning lights are erected on Michigan Street, they have to work at the right time. Right now, the city installed warning lights on Main Street are flashing at the wrong time, ending their operation five minutes before the school dismisses students.

Even then, drivers have to obey them; a common complaint among parents is that drivers are not doing so. That just angers Dieter and parents alike, “to me that’s ridiculous. You’re not going to lose any time from work, or wherever you’re going, that you can’t just slow down [for] two or three hundred feet,” said Dieter.

As for the other safety issues, Grimes is trying to come up with a new way for parents to pick up their children. She is hoping to remove a portion of fencing from a vacant plot of land on school property so vehicles can exit through it and onto a side street instead of directly onto the two busy thoroughfares.