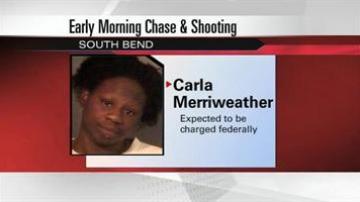 ST. JOSEPH COUNTY, Ind. -- A woman who led South Bend Police on a chase around 3 a.m. Wednesday is facing federal charges, according to the St. Joseph County Prosecutor's Office.

According to investigators, South Bend Police were chasing a stolen truck being driven by a female suspect.

The truck belongs to a retired officer.

As she fled, she allegedly fired shots at officers following her.

"The whole thing is weird, first a female stealing a truck you don't see that very often, and second to have it be a retired policeman's vehicle with a gun in it. And third speeds in excess of 100 miles per hour at 3 o clock in the morning when people are getting out of bars and going to work, and to have her shoot at police it's all very odd," said Metro Homicide Commander Tim Corbett.

At least one officer returned fire.

No one was injured in the exchange of gunfire.

The woman was later apprehended in the parking lot of the post office on Main Street near Chippewa.

The suspect, 24-year-old Carla Merriweather, was questioned and booked into the St. Joseph County Jail.

The St. Joseph County Metro Homicide Unit was called in to investigation because the suspect and an officer fired weapons.

After consulting with federal investigators, the county prosecutor decided not to file charges against Merriweather.