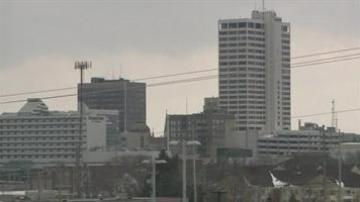 SOUTH BEND, Ind. -- New York based Washington Square Realty officially took over receivership of the Chase Tower in downtown South Bend on Tuesday. The building's new manager spoke about the repairs and what it will take to get the tower up to code.

After those items are fixed, repaired or replaced, they management will have to fix problems like mold, cracks in the walls and sluggish elevators.

For Nemeth, the next few months are critical for the Chase Tower.

He was recently hired on as the building's new manager after Washington Square Realty bought the building at a sheriff's sale for $4.5 million.

"They're excited to tackle the tasks at hand and there are quite a few tasks they need to tackle. We're implementing strategies to address those issues one by one," said Nemeth.

Nemeth says the new owners are already working to make some of those repairs.

Right now they're addressing violations cited by the fire marshal before focusing on other problem areas of the building.

"I've been talking to folks from elevator companies right now. It's all a part of the strategy getting this thing done as quickly as we can," said Nemeth.

Nemeth wasn't able to provide a timeline on when those repairs would be completed, but promised a positive change soon.

After Chase Tower is up to code, his focus will shift towards marketing the building and bringing back tenants.

"If you want to curry some favor with the existing tenants that we do have, show us don't tell us. I think they have the ability and the willingness to do that, and I look forward to the future," said Nemeth.