Cheetah cub and puppy paired up 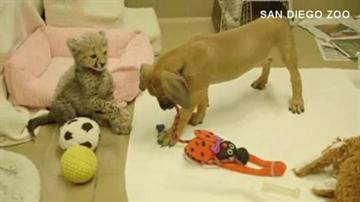 SAN DIEGO, Calif. (CNN) -- The San Diego Zoo is sharing video of its cheetah cub and puppy on a play date.

The nursery windows were opened Monday for the first time since the two animals were paired.

The cheetah is an animal ambassador for the zoo's safari park, after his mother rejected him.

Ambassador cheetahs are paired with a domestic dog for companionship.

The idea is that the dog will help calm the cheetah.

For now, their play dates will be closely monitored.