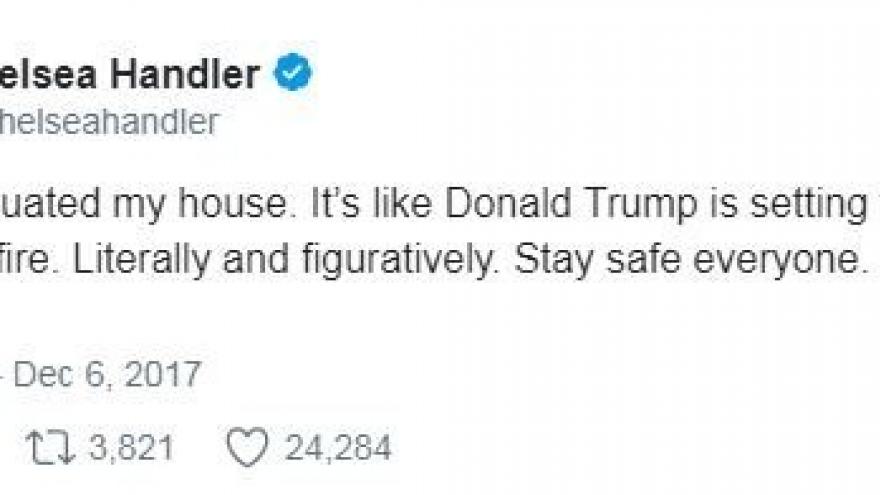 (CNN) -- Comedian Chelsea Handler is among the thousands who have had to flee their homes over the last three days as several wildfires burn in Southern California.

"Just evacuated my house. It's like Donald Trump is setting the world on fire. Literally and figuratively," Handler tweeted Wednesday morning. "Stay safe everyone. Dark times."

A representative for Handler did not immediately respond to CNN's request for further comment.

There are several active fires in and around Los Angeles and Ventura counties.

On Wednesday, a blaze known as the Skirball fire broke out along the I-405, one of the nation's busiest, prompting a mandatory evacuation order for a portion of the affluent Bel Air neighborhood.

The Skirball fire also led to the closure of that major highway. It has since reopened in both directions.

The largest fire currently being battled is Ventura County's Thomas fire, which has claimed 90,000 acres and destroyed at least 150 buildings, according to officials.

"Westworld" resumed production on Wednesday but continues to monitor the situation, according to HBO.

Handler's evacuation came on the same day she was set to film the final episode of her "Chelsea" talk show.

Actress and singer Lea Michele was among the evacuees. The "Glee" star told The Hollywood Reporter that she left her home on Wednesday morning. "I had two minutes to think what I would take and I grabbed my cat and that's all," she said.

Socialite Paris Hilton tweeted that her house was being evacuated and her pets moved to safety.

"Thank you to all the firefighters who are risking their lives to save ours," she wrote on Twitter.