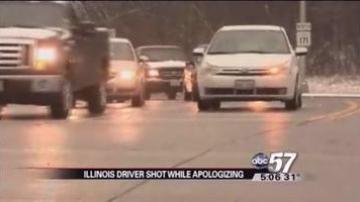 CHICAGO, Ill. -- An Illinois  driver is recovering after a shocking case of road rage.

The man claims he knew he was wrong when he cut off another car. The 58-year-old said when he pulled over and tried to apologize he was shot.

It happened Monday morning in Cook County. Investigators said the man went over to a silver pickup, and tried to apologize. That's when the driver shot him in the stomach and sped off.

"To have a scenario where someone takes the time to pull over to apologize, and then someone shoots them, this obviously is a very dangerous individual,” said Cook County Sheriff Tom Dart.

Sheriff's investigators were passing out fliers Tuesday to get help finding the shooter.