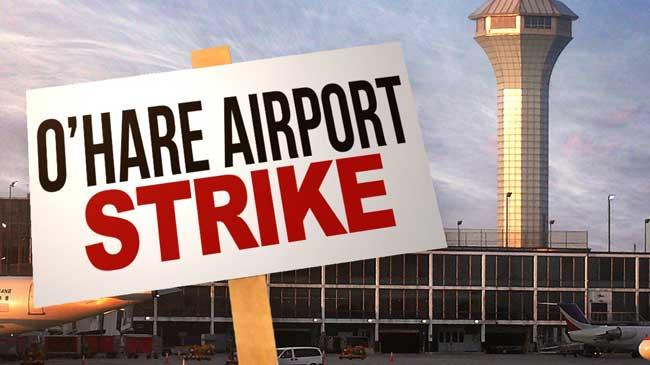 By Aaron Smith and Jon Ostrower

The work stoppage will deliberately miss the busy Thanksgiving travel week, a tactic aimed at bolstering public support, said spokeswoman for the Service Employees International Union during a at a press conference at the airport Monday morning.

"It was never their intent to disrupt travel," said the spokeswoman. "They do want to gain public support."

Janitors, baggage handlers, cabin cleaners and wheelchair attendants want a wage of $15 an hour. Some are paid minimum wage, $8.25 an hour in Illinois. The strike would not affect more critical workers, like air traffic controllers and security screeners.

"After building their case for $15 and union rights, O'Hare workers are ready to do whatever it takes to make sure the city, their employers and the airlines listen to their concerns," the workers said in a statement.

The workers are not unionized by the Service Employees International Union, but they are supported by the SEIU. They voted last week to authorize a strike. The duration of the strike was yet to be determined, said a spokesman for the union.

The airport workers in Chicago are employed by Prospect Airport Services, AirScrub Inc. and the city of Chicago. O'Hare is a hub for both American Airlines and United Airlines, and many disruptions there could have a ripple effect on flights across the country.

Both airlines said they are taking the necessary steps to avoid inconveniencing fliers.

"American supports better pay for workers across the board. We also respect the right of employees and workers to organize," the airline said in a statement, "but we do not get involved in union representation discussions with our vendors and their employees."

United said it is "taking the necessary steps to ensure a safe and on-time operation for our customers."

O'Hare is the second busiest airport in the U.S., handling 77 million passengers last year. AAA estimates that 3.7 million people will fly throughout the U.S. over the Thanksgiving holiday, from Wednesday through Sunday.

As O'Hare workers strike on November 29, other workers around the country also plan to protest low wages and alleged mistreatment. Fast food employees at McDonald's restaurants in 340 cities and other supporters have planned rallies at O'Hare, Los Angeles International Airport and Newark-Liberty International Airport on the same day, the union spokesman said.