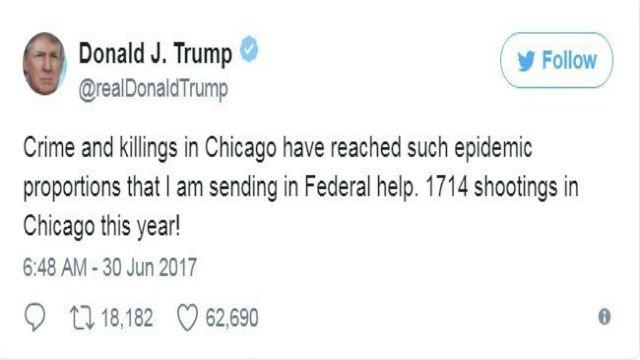 By Ryan Young and Eugene Scott

(CNN) -- The Chicago Police Department and Department of Justice's Bureau of Alcohol, Tobacco, Firearms and Explosives will announce Friday a new task force aimed at decreasing the spread of illegal guns throughout the Windy City.

"This new strike force will significantly help our police officers stem the flow of illegal guns and create a culture of accountability for the small subset of individuals and gangs who disproportionally drive violence in our city," said Chicago Police Department Superintendent Eddie Johnson.

"Crime and killings in Chicago have reached such epidemic proportions that I am sending in Federal help. 1714 shootings in Chicago this year," he tweeted.

The President threatened to send in help early in his administration after months of campaigning against crime in Chicago and other major cities.

"If Chicago doesn't fix the horrible 'carnage' going on ... I will send in the Feds," he tweeted four days after his inauguration.

The Trump administration has been criticized for calling Chicago a "war zone" and "totally out of control" despite not laying out a long-term vision for America's cities. CNN first reported in early February that the ATF had been working on a plan to permanently transfer approximately 20 ATF agents to Chicago in order to "beef up" the federal presence in the city.

Meanwhile, Chicago police say crime in the city has decreased from 2016, when there were 4,331 shooting victims and 762 homicides. Chicago police said Friday there has been a 14% drop in violent crime overall in the city compared to last year -- with the two most violent districts seeing a 33% drop in violent crime -- and there have been 234 less people shot this year.

The homicide rate, however, has remained flat.