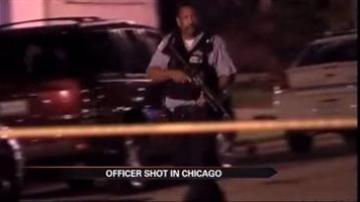 CHICAGO -- A Chicago police officer is recovering from surgery after being shot and wounded Wednesday night in Morgan Park.

A 15-year-old fought with the officer and police say he shot the officer.

The officer fired back.The teenager was taken to the hospital.

Three teenagers are in custody with one of them hospitalized.

The 35-year-old police officer is recovering after he was shot in the leg.