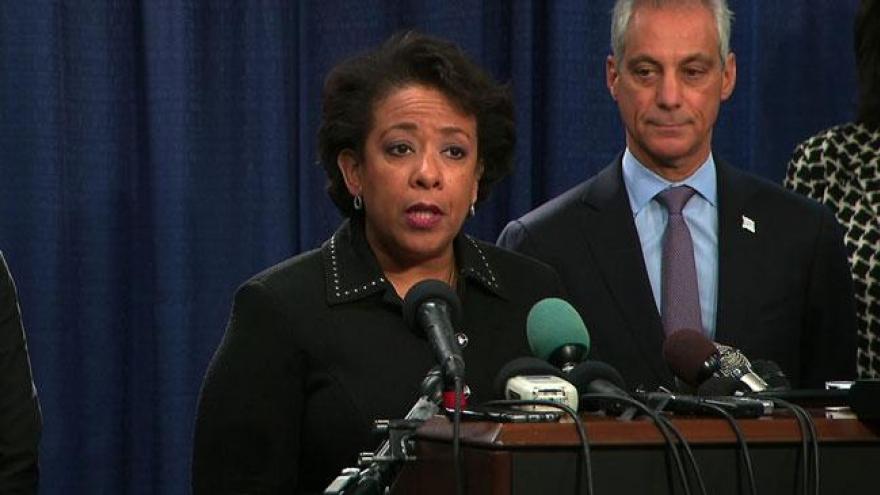 By Jason Hanna and Madison Park

(CNN) -- The Chicago Police Department has unconstitutionally engaged in a pattern of excessive force, US Attorney General Loretta Lynch said Friday, wrapping up a 13-month federal probe of a department that has been under heavy scrutiny over officer-involved shootings.

The city and the Justice Department have agreed to negotiate a reform plan that would be overseen by a federal judge, Lynch said in Chicago.

The Justice Department, which began its investigation amid public uproar over the 2014 fatal shooting by Chicago police of 17-year-old Laquan McDonald, said it found numerous incidents of unjustified force, including:

• Shooting at fleeing suspects who presented no immediate threat;

• Shooting at vehicles without justification;

• Using Tasers on people who posed no threat;

• Using force to retaliate against and punish people.

"The resulting deficit in trust and accountability is not just bad for residents -- it's also bad for dedicated police officers trying to do their jobs safely and effectively," Lynch said.

"CPD has not provided officers with adequate guidance to understand how and when they may use force, or how to safely and effectively control and resolve encounters to reduce the need to use force," the report says.

Friday's announcement came a day after the Justice Department announced a deal on a plan to reform police policies in Baltimore, after a similar investigation found that police there searched and arrested a disproportionate number of African-Americans and used excessive force against juveniles.

Mayor Rahm Emanuel said the police department has upgraded use-of-force policies, provided every officer with a body camera and made other changes.

"While the Chicago Police Department has made real progress and achieved meaningful reforms, the incidents described in this report are sobering to all of us," he said in prepared remarks. "Police misconduct will not be tolerated anywhere in this city and those who break the rules will be held accountable for their actions."

Dean C. Angelo Sr., president of the Chicago Fraternal Order of Police Lodge 7, expressed concerns about what he termed the "lightning speed" of the DOJ investigation.

"Completing an investigation into the 12,000 member Chicago Police Department, and in a city with more than 2 million citizens in less than one year, clearly brings to light that the outgoing DOJ wanted to issue a report before the new administration takes over on January 20, 2017," he said in a statement. "What also remains to be seen is whether or not the report might be considered compromised, or incomplete as a result of rushing to get it out before the Presidential Inauguration."

The Justice Department's report detailed examples of what it said was excessive force by Chicago police officers, including:

• The shooting of a fleeing, unarmed suspect in the back.

"The officer told investigators the suspect had turned around to point a black object. This account did not square with the location of the shooting victim's gunshot wounds and appeared contrary to video footage that showed the suspect running away from the officer," the report says, without revealing the names or date involved.

The city's review panel, the Independent Police Review Authority, accepted the officer's account "despite the conflicting evidence," and issued a report that did not mention the video, the Justice Department says.

• The fatal shooting of a pedestrian who ran after being ordered to freeze "because he had been fidgeting with his waistband."

"Three officers gave chase and began shooting as they ran. In total, the officers fired 45 rounds, including 28 rifle rounds, toward the man," the report says. "Several rounds struck the man, killing him. The officers claimed the man fired at them during the pursuit. Officers found no gun on the man.

"However, officers reported recovering a handgun nearly one block away. The gun ... was later determined to be fully loaded and inoperable, and forensic testing determined there was no gunshot residue on the man's hand."

IPRA "found the officers' actions were justified without addressing the efficacy of the pursuit or the number of shots fired," the report says.

• Threats and force against boys who were accused of playing basketball on an officer's property, after a neighbor had called to report them.

"The officer pointed his gun at them, used profanity, and threatened to put their heads through a wall and to blow up their homes," the report says. "The boys claim that the officer forced them to kneel and lie face-down, handcuffed together, leaving visible injuries on their knees and wrists.

"Once released, one boy called his mother crying to tell her an officer had pointed a gun at his face; another boy went home and showed his mother his scraped leg and, visibly upset, said 'the police did this to me.' "

After the incident was reported to IPRA, the officer received a five-day suspension, but "was never interviewed and his reasons for not contesting the allegations are not documented in the file," the report says.

Chicago police under scrutiny for shootings

The Justice Department began investigating Chicago police in December 2015 in the wake of several high-profile cases of alleged police misconduct, including the death of McDonald, whose case spurred protests and helped fuel a national conversation about police officers' use of deadly force. The report said the department had violated safeguards in the Fourth Amendment.

McDonald, a black teen, was shot 16 times as he walked away from officers in October 2014. His death went largely unacknowledged until November 2015, when a judge ordered the release of dashboard camera footage that contradicted officers' accounts of the shooting.

Just before the video was released, Officer Jason Van Dyke was charged with first-degree murder; he pleaded not guilty and is awaiting trial.

The video outraged many Chicagoans, who took to the streets to protest what they felt was an excessive use of force and dishonesty by police who initially accused McDonald of threatening them.

In the fallout of the case, the police superintendent resigned and many called for Emanuel to do the same. But Emanuel held firm and vowed to repair the department's trust with the African-American community.

Emanuel had said of the DOJ investigation back in 2015: "We accept it, and we need it."

'No regard for the sanctity of life'

The mayor created an independent task force to examine the police force, which released a report in April that accused the department of institutional racism and described its accountability system as broken.

That report said police "have no regard for the sanctity of life when it comes to people of color" and have alienated blacks and Hispanics with the use of force and a longstanding code of silence.

As the department has grappled with allegations of excessive force, it also has battled a soaring homicide rate. Chicago had a staggering 762 murders in 2016, marking the city's deadliest year in nearly two decades.

The Justice Department's report touched on the homicide surge, saying that for Chicago to find solutions, "it is imperative that the city rebuild trust between (the police department) and the people it serves."

Under increasing criticism, the Chicago Police Department has pledged changes, including how it trains officers on the use of force.

Last year, Police Superintendent Eddie Johnson announced that all police officers soon would be required to wear body cameras and that 970 additional sworn positions would be added over the next two years to provide "new blood" to the department.