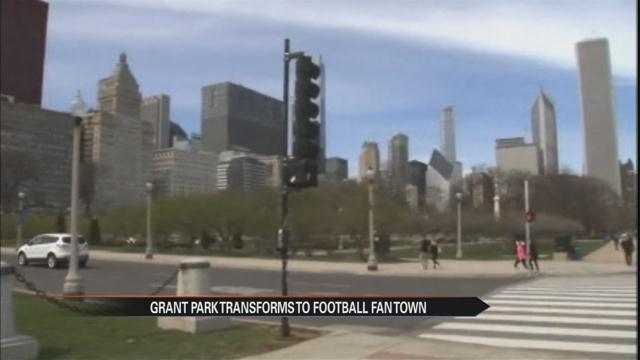 The NFL Draft is about two weeks away and this year will be held in Chicago.

That's the first time in 51 years.

Fans will get to experience the draft in a way never before possible.

While the picks will be announced inside Auditorium Theatre in a closed, ticketed event, the NFL is transforming a large part of Grant Park into a free, three-day fan festival.

It will be transformed into "Draft Town", allowing thousands of fans to experience the draft in person.

There will be a Super Bowl museum and team houses.

1,000 fans who get tickets can see the actual operations of the draft team tables as well.

"It's going to be a huge opportunity for the city," says Don Welsh, the President and CEO of Choose Chicago. "When you start thinking about the fact that 50-plus million people watch the NFL Draft, probably outside the Super Bowl, it's one of the biggest events the NFL does."

The NFL has partnered with the same company who produces Lollapalooza every summer.

The NFL Draft is set for April 30-May 2 in Chicago.