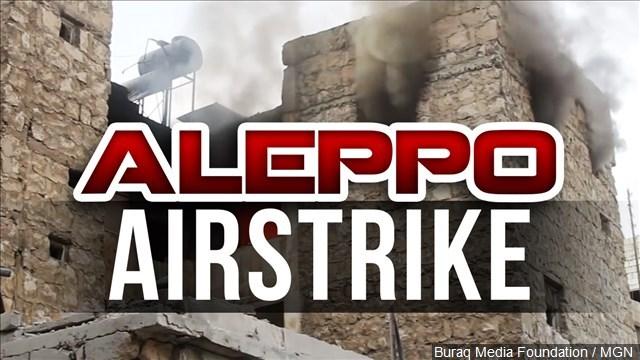 (CNN) -- The video shows a devastating scene: Two boys covered in dust desperately cling to each other and cry.

"My brother is gone," one sobs.

It's one of several harrowing videos activists shared after a barrel bomb in the Syrian city of Aleppo killed at least 15 people, including children, according to two groups monitoring the situation.

Activists offered differing accounts of how many children were killed in Thursday's airstrike, which reportedly occurred in the rebel-held Bab al-Nayrab neighborhood. The activist group Aleppo Media Center reported five children were among the dead; the UK-based Syrian Observatory for Human Rights said 11 children had died.

The barrel bomb attack was one of two deadly attacks Thursday in the city, activists said.

Amnesty International says barrel bombs are a common tactic of the Syrian regime. The strikes came amid Russia's agreement to a 48-hour ceasefire and the United Nations' emphasis on a need for one.

As Aleppo residents mourned the dead Friday, people fled their homes in another city that activists say the Syrian regime has pounded with barrel bombs.

Residents in the city of Daraya left on buses Friday as part of an evacuation agreement brokered between the government and rebels in the war-torn country.

Activists posted videos of the Aleppo barrel bomb attack online. CNN hasn't independently confirmed the authenticity of the videos, which reportedly show a rebel-held area in southern Aleppo after the attack. In the videos, rescuers help survivors and search for the missing. Residents dig through rubble, looking for loved ones.

In one video, a man sits outside his demolished house, visibly upset. "Don't step over them," he says, referring to his family members. "I lost my five children, oh God."

Another video posted by activists in Aleppo shows a woman speaking to her dead child.

"Hassan, it's your mom," the mother says as she looks at the child whose eyes are still open.

She touches his face and closes his eyes.

Last week a video posted by the Aleppo Media Center captivated the world and was another stark reminder of the toll of the war in Syria. It showed a boy, Omran Daqneesh -- no older than five years old -- bloodied and covered with dusk, sitting silently in an ambulance awaiting help after his family's house was destroyed by an airstrike.

As stories of death and destruction continued to emerge Friday, Russian Foreign Minister Sergei Lavrov and US Secretary of State John Kerry met in Geneva on Friday to discuss Syria.

Meanwhile, about 200 miles south of Aleppo, residents packed up their belongings and evacuated from Daraya.

A convoy of Red Crescent ambulances arrived early Friday at the city, which is just southwest of Syria's capital, Damascus.

In a series of tweets, residents are seen carrying their belongings along the streets of the heavily damaged town, which has faced food and water shortages.

Others took the time to say goodbye by posting selfies.

The Local Council of Daraya has said civilian families will be brought to western Ghouta in the Damascus province, while Free Syrian Army fighters and their families will be moved towards Idlib, in northern Syria.

In addition to barrel bombs, the Syrian regime has been accused of using other forms of weapons.

"It is now impossible to deny that the Syrian regime has repeatedly used industrial chlorine as a weapon against its own people," US National Security Council (NSC) spokesman Ned Price said in a statement Wednesday.