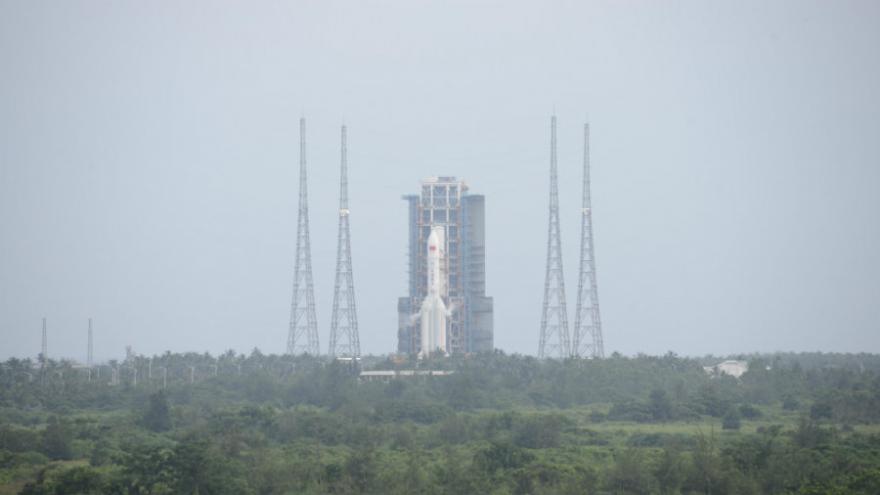 But 40 minutes later, the state-run Xinhua news agency flashed a headline declaring the launch a failure -- without providing any details.

Dubbed "Chubby 5" for its huge size -- 5 meters in diameter and 57 meters tall -- the LM-5 rocket is designed to carry up to 25 tons of payload into low orbit, more than doubling the country's previous lift capability.

It then tweeted: "Anomaly was detected during its flight and further investigation will be carried out."

The launch failure means further delay for a series of planned Chinese space endeavors -- including its robotic and eventual human lunar programs -- according to Joan Johnson-Freese, a professor at the US Naval War College and an expert on China's space program.

"With the LM-5 being new technology, the failure points out that rocket science is extremely difficult and why more countries don't have the technology," she said.

Before the launch attempt, Johnson-Freese said the rocket would give China "heavy lift capabilities" needed to develop a large space station as well as new capabilities to reach interplanetary destinations.

China has announced plans to land a robotic probe on the dark side of the moon later this year and to reach Mars around 2020.

All such future missions will depend on the LM-5 and space officials told reporters Sunday that the latest launch would help perfect the rocket design, including enabling it to send a space station into orbit "in a year or two."

Originally announced in 2001, the LM-5 project initially suffered lengthy delays because of funding challenges and difficulties in developing new technologies for the first Chinese launcher to fully use liquid propellant.

The LM-5 finally made its debut last November, also at the newly built Wenchang site, and was successfully launched.

Its creators have said the LM-5's capabilities are now on par with the US-designed Delta IV rocket, long considered the most powerful in the world.

"The two rockets are at the same level ... though different propellant mix means the Delta is still a bit more efficient," He Wei, the LM-5's general designer, told CNN before the failed launch.

"The Delta has had years of experience while this is only the second launch for the LM-5 -- so we will keep modifying and improving to make our rocket more mature and reliable."

China was late to the space race -- it didn't send its first satellite into space until 1970, just after the United States put the first man on the moon.

But in the decades since, China has pumped billions of dollars into research and training.

Since 2003, China has staged a spacewalk, landed a rover on the moon and launched a space lab that it hopes paves the way for a 20-ton space station.

It has also sent five crews into space in the same span of time, making it only the third country in the world -- after Russia and the US -- with such success.

CNN was among a dozen overseas news organizations to gain rare access to the launch site in Wenchang, a sleepy city of 600,000 residents on the east coast of Hainan, sometimes called China's Hawaii.

The Wenchang space center, completed in 2014, is the country's fourth and newest. Unlike the other three Cold War era-built sites -- in the desert or mountains -- Wenchang's coastal location allows for easy transportation of rocket stages and payloads by sea.

Its proximity to the equator also benefits space launches by adding orbital velocity to the rocket, as the Earth rotates the fastest at the equator.

While entry to the actual space center is strictly controlled by the government, local officials have touted public viewing areas in the city capable of accommodating thousands of space tourists.

State media outlets have expressed hope to see Wenchang turn to China's Cape Canaveral, a top tourist attraction in the US state of Florida thanks to two major space launch centers nearby.

Bilateral cooperation in space programs between Washington and Beijing has been nonexistent since the US Congress in 2011 banned NASA from working with China over national security concerns.