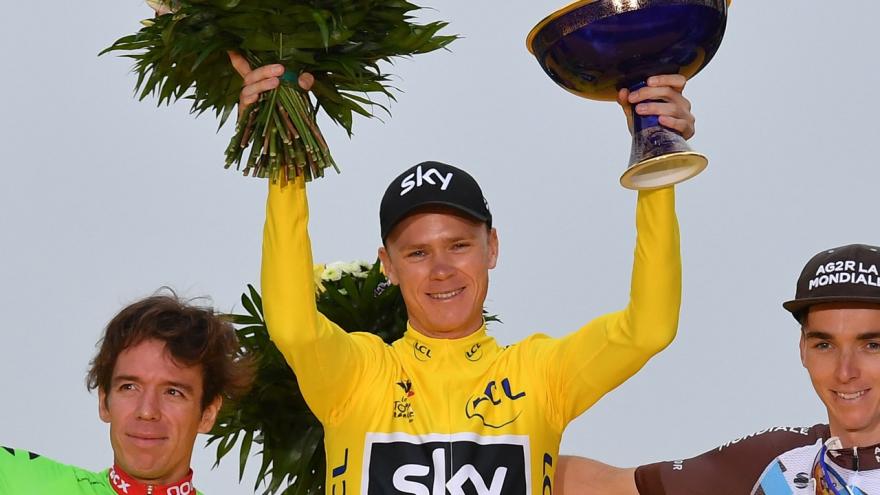 (CNN) -- Britain's Chris Froome moved within one win of the all-time record when he clinched his fourth Tour de France win on the Champs-Elysees in Paris.

Thanking his Team Sky team mates, Froome crossed the finish line of the 21st and final stage in Paris to win cycling's toughest race for the third time in a row, 54 seconds clear of Cannondale-Drapac's Rigoberto Uran of Colombia in second place and two minutes, 20 seconds faster than France's Romain Bardet of AG2R La Mondiale's in third.

"I'm speechless, it's just an amazing feeling," Froome said in a televised interview. "The Champs-Elysees never disappoints. There is something magical about it when you spend three weeks thinking about being here in this moment. It's so rewarding every time."

Froome, a 32-year-old Briton, embraced his wife and young child after he clinched his fourth win in five years near the Arc de Triomphe in Paris after what is traditionally a champagne-sipping procession on the final day of the Tour.

"A huge, huge honor to be talked about in the same sentence with those kind of guys," Froome said. "Just their place in history of the Tour de France, just feels so privileged to be in this position and have the opportunity to be going for this kind of record."

Although American Lance Armstrong won seven Tour de France titles between 1999 and 2005, he was stripped of his titles in 2012 for doping.

It was also the fifth Tour de France victory for Britain's Team Sky, which first won the title in 2012 with Bradley Wiggins before Froome took it in 2013, 2015, 2016 and again this year.

Unlike previous years, Froome's fourth title wasn't a given from the start, with the general classification going down to the wire and only being decided on the penultimate time trial on Saturday in Marseille.

But Froome, who had entered the time trial with a narrow 23-second lead over Bardet and a 29-second lead over Uran, dealt his rivals a decisive blow when he finished third with a powerful ride in Marseille, extending his lead over Uran to 54 seconds. Bardet faded badly, slumping from second place to third in the overall standings at two minutes, 20 seconds behind Froome.

"Each time I've won the Tour, it's been so unique, so different, such a different battle to get to this moment," Froome said. "They're all so special in their own way. And this year will be remembered for being the closest of the four battles between the GC [general classification] rivals."

Not a household name

Froome, who did not win a stage but finished third four times, may be on the cusp of becoming one of the all-time cycling greats, he is not among Britain's best-known sporting heroes.

The Kenyan-born British rider has often been overshadowed at home by the now retired Wiggins, the first British Tour de France winner in 2012 and a five-time Olympic champion.

Last year, Froome didn't even make the 16-strong shortlist for the BBC's Sports Personality of the Year despite winning his third Tour de France title.

Born in Kenya to English parents, who ran a crop farm, Froome started cycling seriously when he 13 years old. An avid collector of snakes and a keen mountain biker in the Kenyan bush when he was young, Froome went to secondary school in Johannesburg and studied economics at the University of Johannesburg for two years before becoming a cycling pro. He now lives in Monaco with his young family.

Although Froome was booed at the start of the time trial yesterday in Marseille, and also got a hostile reception when he nearly caught up with his main French rival Bardet at the finish line in the stadium, he has always remained gracious.

"The atmosphere here is incredible, it's huge," he told reporters yesterday.

Today's stage, a 103km trek from Montgeron, where the Tour started in 1903, to Paris, started with the riders and their supporting staff enjoying a glass of champagne as rain fell and thousands of spectators lined the streets.

Andre Greipel had been looking to win a third straight sprint victory on the Parisian cobbles, but in the end, Dylan Groenewegen of the Netherlands crossed the finish line at the Champs-Elysees just ahead of the German in a time of two hours, 25.39 minutes.