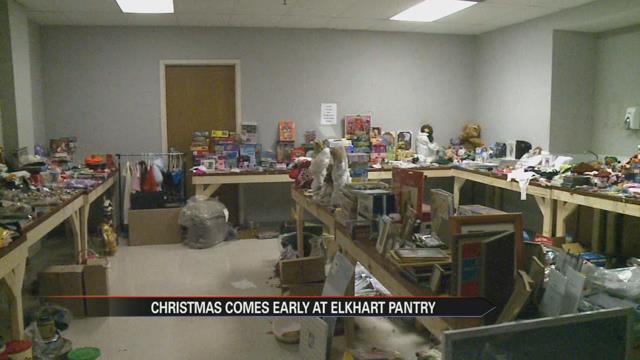 It’s the season of giving and one pantry in Elkhart has been working hard to create Christmas miracles for families in need.

More than 70 families flooded The Shepherd’s Cove in Elkhart Saturday afternoon for some free Christmas shopping.

“This stove means everything,” Bentley said. “I haven’t had a stove, or an oven, a working oven, for over three years.”

Bentley was ecstatic to find a stove at the Cove so she could bring it home to her three kids.

Her story was one of many coming out of the Cove Saturday.

Shoppers not only had their choice of the pantry’s usual items, but also, special access to the Cove’s Christmas room, where brand new items, donated throughout the year, are saved for the holiday season.

“It’s really nice!” shopper Karen Silk said. “Where I live, they don’t have nothing like this.”

Silk came to the Cove from Michigan with her daughter and they each got presents for children and grandchildren, plus some essentials.

“Some of the things will help keep us warm,” Silk said. “And some of it will help with Christmas.”

Cove Director Sharlee Morain said the Christmas room is all about giving to those who need a little holiday cheer, like a mother of seven she spoke with on Friday who was originally only able to get her children clothes they needed for Christmas.

“And [the mom] said, ‘and then I came here, and my kids are getting a Christmas this year.’” Morain said.

Despite all the giving, the Cove is still in need.

Inside, the temperature was a brisk 50 degrees Saturday afternoon, because turning the heat on is so expensive.

“We can’t afford that,” Morain said. “So, we put hats on, we put gloves on, I’ve got three layers on and we work in the cold.”

Chilly atmosphere aside, a record number of families visited the Cove this year, and many left with warm hearts.

Morain hopes the spirit of giving at the Cove will be passed along.

“[I hope] the clients would take some of the love that we share with them and share it in the community,” Morain said. “That’s my Christmas wish.”

Saturday was the last day of year the Cove was opened.

Morain said final numbers indicate the Cove was able to help about 450 families in 2015 – a record.

Though it will be closed until March, the donation room at the Cove will remain open 24/7.

And if you’re interested in donating some money to the Cove so they can turn the heat on, you can log onto their website and donate there.