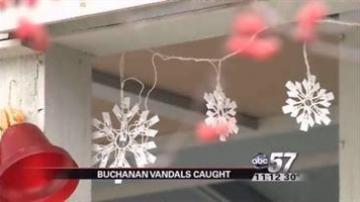 BUCHANAN, Mich. – The Grinches have been caught in Buchanan.

Last week Christmas decorations were vandalized in Buchanan, Thursday, ABC 57 found out that the vandals have been arrested.

They caused about $150 in damage to Buchanan’s city lights by breaking bulbs and tearing light cords apart, but two 16-year-olds and a 17-year-old have now been nabbed thanks to a reward the city offered.

The chief of police said they probably won’t be on the nice list this year.

"I know Santa pretty well, and I'm sure that he'll be dropping off some coal for a few families this year,” said Buchanan Chief of Police Bill Marx.

Aside from that, the chief is hoping the kids will pay for the damage and do some community service.