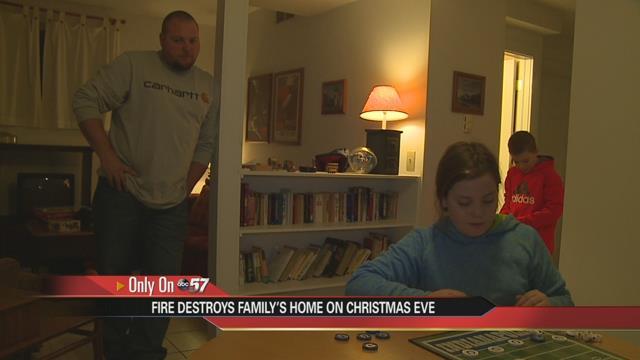 The New Buffalo community is helping a family whose home was destroyed in a fire on Christmas Eve.

The family of four made it out safely but the home and most of their belongings were completely destroyed.

It was supposed to be a typical Christmas Eve for single parent Steve Ruszkowski and his three kids in their home of 8 years on South Taylor Street.

Their world was turned upside down around 9:30 a.m. when a fire tore through their home.

Ruszkowski was able to quickly get his children out of the home safely but they were unable to save any of their belongings.

“Everything’s gone and everything changed. You know we don’t have a whole lot, but the stuff they did have was there’s. And as they watched their stuff burn it tore their hearts out and it tore my heart out,” said Ruszkowski.

Ruszkowski says he’s just grateful that his family is OK, a sentiment shared by even the youngest of the Ruszkowski bunch.

“The most important thing is that all three of us, all four of us, are alive here today sitting in a beautiful house having everything that we have,” said 8-year-old Craig Ruszkowski.

Everything that the family has now was donated to them over the past few days. The New Buffalo Township Fire Department began collecting donations the day of the fire and many in the town have also stepped up to help.

“If you sit back and think about it hard enough, it’ll tear you up,” said Ruszkowski.

Donations for clothes and necessities along with Christmas presents for the kids have poured in.

“I must be doing something right because a lot of people like us out there and I think it’s just because I’ve got three great kids,” said Ruszkowski.

“In this small town, people do care about us. I know that people out there love us and care about us because they gave us all this stuff,” said Craig Ruszkowski.

Ruszkowski may have made it out of the fire with a family of four, but, since then New Buffalo has shown him how big his family truly is.

“You realize your family is 3,000 people. We have a whole town that loves us to death for some reason,” said Ruszkowski.