Church's billboard over strip club reads, 'Strip for me' 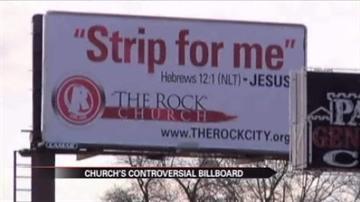 BIRMINGHAM, Ala. -- A surprising billboard message hanging over an Alabama strip club that promotes a church is getting lots of attention.

The sign, which reads "strip for me," quotes Jesus in the bible from the Book of Hebrews.

The Birmingham church says it wants the sign to catch people's attention and make them think twice about how they spend their money.

"The scripture says, therefore since we are surrounded by such a huge crowd of witness, strip off every weight and sin that slows us down.  Maybe your life is moving slow because of stuff you still need to strip off," said Pastor Mike McClure, the Rock Church.

The billboard has been mistaken as an ad for the club.

Responses have been mixed. Some say it is inappropriate while others believe it is a creative way to get people to think.