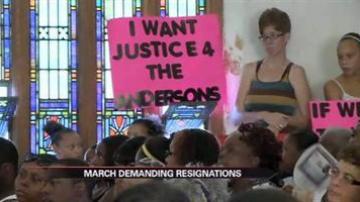 SOUTH BEND, Ind. -- A citizen's group is demanding the resignation of the two men in charge of the St. Joseph County Metro Homicide Unit and South Bend's Interim Police Chief.

The call for those resignations will be made on Wednesday night in front of the County-City Building in downtown South Bend.

It will be the culmination of a demonstration orchestrated by people who said they have lost faith in law enforcement's ability to be impartial in how they solve cases and treat minorities in South Bend.

According to investigators, 31-year-old Michael Anderson choked to death on a bag of weed, but a group led by Mario Sims believe the police are to blame.

Now an organized march from the location of Anderson's death to the heart of downtown is being planned.

The march is set for Wednesday and will start at 6 p.m. on Calvert Street, the spot where police caught Michael Anderson. The route will take them three miles to the County-City Building.