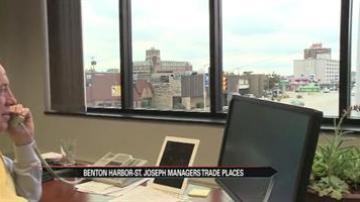 BENTON HARBOR, Mich. -- From the price of water, to the price of housing, it is no secret that the City of St. Joseph and the City of Benton Harbor have some drastic differences. So city leaders traded places for a day to try to improve relations between the cities.

"It’s a tough job," Lewis said, after a day in the life of Benton Harbor’s emergency financial manager.

"The one big thing, it's no secret they have to deal with some financial issues which they are working their way through," Lewis said.

For Lewis, the manager swap was all about one thing, "Learning about who my neighbor is, just like if you are moving into a neighborhood, you always want to know your neighbors.  It does not mean that you are going to pay for their mortgage or anything like that, you can just be there to help."

Benton Harbor’s Mayor Hightower says working together makes sense. "It was once called the twin cities, so why not work together?"

As for what has taken the cities so long to work on this relationship the mayor says, "It is the demographics, it’s the lack of understanding of each others cultures probably, and of course Benton Harbor has its troubles."

But Hightower is glad to see the city of Benton Harbor playing well with others.

"If we worked together like this in the past, you may not have three or four water plants with in a seven mile radius," he said.

Lewis says he hopes this is the beginning of a great working relationship for the two cities.

"They’ve got a lot of positive things going on over there and as Benton Harbor improves, we improve," Lewis said.