City of Buchanan worried about things flushed down toilets 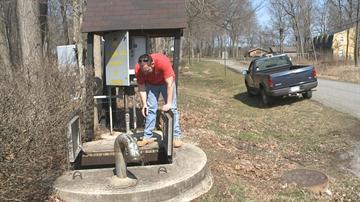 BUCHANAN, Mich. - There is the potential for major sewer problems in a Buchanan neighborhood and just one culprit could be behind the whole thing.

The City of Buchanan Public Works Department has un-clogged the Rivershore Pumping Station more than 20 times in 2012. The station serves about 100 homes on Buchanan’s East side.

Lee MacDonald lives across the street from the pumping station on Rivershore Lane and takes care of her 2-year-old grandson, Gavin, but she said the culprit is not her. “We don’t. We know better,” said MacDonald. “When we had a septic system we couldn’t do it. I don’t know why they think they can when they have sewers.”

According to Jason Williams with Buchanan’s Wastewater Plant, crews have been finding sanitary wipes, baby wipes and baby diapers in the pump. “We come out here at least twice a week,” he said. “Two or three times a week.”

Williams said the city is constantly unclogging the pump and whoever is clogging it is not a first time offender. “It takes quite a few to plug up a pump,” he said.

City crews have been able to keep the pump working for now. “If we cannot respond fast enough it will start to back up into people’s homes,” said Williams.

“That would be very gross,” said MacDonald. It’s something neither she nor her neighbors want to deal with.