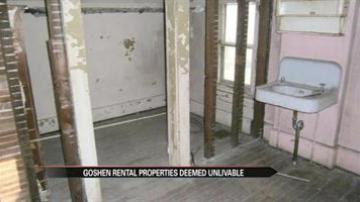 GOSHEN, Ind. -- The mayor of Goshen says he is at his wits end with landlord and property owner Ron Davidhizar. The city says because he hasn't done anything to improve a property on Middlebury Street, the city is taking it over.

The property at 205 Middlebury Street in Goshen doesn't look too bad on the inside.

The inside is another story.

"When I went in to 205 I could smell feces. The feces in the basement was very thick," said Goshen building inspector Steve Bice. "It was just everywhere."

The raccoon feces were at least a foot deep.

"This has been deemed unsafe at this point. Look at the chimney. That could fall on somebody," said

Bice says it will take a lot to make the units habitable.

Bice took photos inside the house of piles of junk, insulation, chipped paint and mounds of animal feces.

"There's mold all over the place," said Bice.

Raccoons won't be running the place for long. The city is taking the property away from Ron Davidhizar.

"This is our first shot at receivership. We'll bring in a third party, the third party will repair the house," said Bice.

The temporary landlord will then rent the house out.

"The third party will receive the rent money for the house until their investment has been satisfied," said Bice.

Then the landlord will turn the property back over to Davidhizar.

The city has turned to this receivership as the last resort. They've been asking Davidhizar to repair this property for years.