City to be reimbursed $5.6M for cleanup of brownfield sites 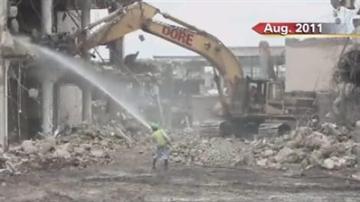 SOUTH BEND, Ind. -- The city of South Bend is going to receive money from ten companies to help pay for the cleanup of two brownfield sites, Ignition Park and the old Oliver Plow Works. The city has spend almost $27 million to clean up the sites.

It has been 50 years since the Studebaker plants were active in South Bend.

The last was torn down two years ago to make way for Ignition Park.

That left behind a $26.8 million mess to clean up.

After years of legal battles, 10 companies have agreed to give the city a total of $5.6 million towards the clean up.

"Based on the total amount of $26.8 million, $5.6 seems like basically just a fraction of that; but I have been assured by legal counsel that; that is the maximum settlement that could be secured," said Valerie Schey of the South Bend Common Council.

Schey and the redevelopment commission were informed of the settlement Thursday morning.

Last week, they purchased several pieces of property for expansion near Ignition Park, including a strip club.

"We are trying to change with the times, and unfortunately in situations like this, it requires a significant investment in order to do it in a safe and responsible manner," said Schey.

The settlement reimburses the city for clean up costs and that along with $6 million in grants from the state and federal government cuts the city's total investment in half.

Ignition Park is not completely out of the woods.

The city will still have to dig into its pockets to pay for continued clean up on the site.

There's also groundwater testing that still needs to be done and environmentalists are keeping a close eye on the asbestos, heavy metals and PCB levels at this site.