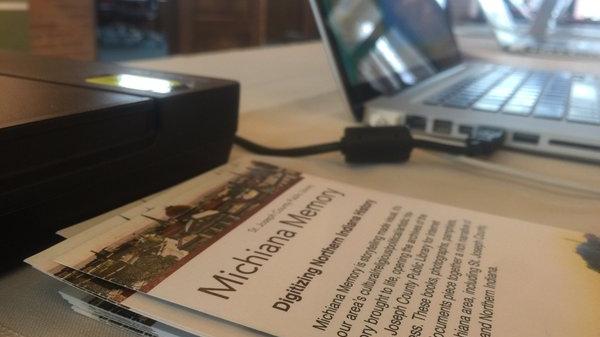 There’s a piece of technology in your house right now that’s probably collecting dust. Truly, how long has it been since you used that flat bed scanner?

What’s probably a piece of history to you, is being used to preserve history in your community.

For Syreeta Hyde and her daughter Sanyia, this is all that stands between her and preserving her heritage and keeping memories safe.

As part of Black History Month, a library, college, and cultural center came together to have a  free ‘Scan-A-Thon’.

“I actually have about eight or nine photo albums at home full of memories. Some people I don't know in them,” says Syreeta Hyde, a South Bend native.

The idea: breathing life into your old heirlooms.

"And I say 'hey, who is this or who is that or who's child, You know' just to get where they actually came from,” says Hyde.

These picture books will be online. Preserved in history.

"It's kind of neat because you look at a picture and be like the way they dress or looks like they were having fun. You have questions and it’s good. Even as a child you like looking at picture books,” says Hyde.

“The library reached out to us a couple years ago, they wanted to put their own collection online. And recognize that having an important civil rights and African American portion of it was absolutely critical to be able to do that," says George Garner, a Curator at the Civil Rights Heritage Center.

And it’s not only to preserve and tell a story.

“When you look at the changes that have happened in our community, you look at that and you say, 'look see, this is what happened’," says Joseph Sipocz with the St. Joseph County Public Library.

It’s also used to be able to teach and educate for generations to come.

"It's the documentary evidence you can see what happened because it's what they said at the time. You can look and you can see for yourself," says Sipocz.

For Syreeta and her daughter Sanyia, seeing is believing.

“It's always important to know about your history. Not just the history of south bend, but where you come from, who your family is. Maybe it'll give them a little insight. Who they are and where they really do come from, “ says Hyde.