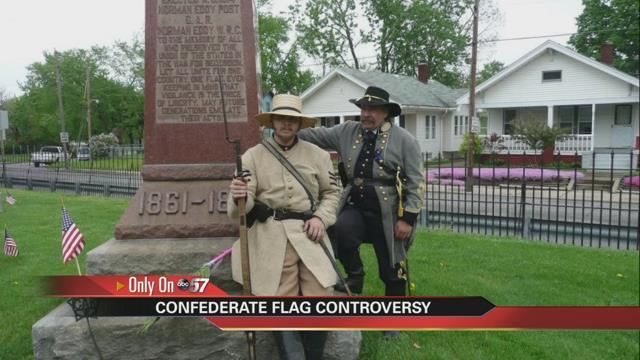 It's a national battle a group of local re-enactors are fighting.

Friday, Reverend Clementa Pinkney will be laid to rest.

He's one of the nine shot and killed in the Charleston church shooting.

The shooting sparked a debate on what should happen to the confederate flag.

ABC 57 spoke with a local Civil War re-enactor about the issue and he says the debate has been one-sided.

Hawk Van Lew says the Confederacy shouldn't be a controversy.

What many see as a symbol of racism, he views as a hard look at America's misunderstood history.

“I have researched that flag for many years,” said Van Lew.

It's a flag that some folks want to forget.

“If you ban one flag you have to ban them all," he said.

Van Lew has carried the flag for more than 20 years.

“It's not the emblem that makes people bad,” he said.

Sometimes he carries it while wearing a lavish costume modeled after Confederate Army General Henry Heth.

Van Lew is a storyteller.

He reenacts Civil War history with a group of folks from all across Michiana.

He does it to educate an important part of America's past.

“There was atrocities on both sides, but I really feel the truth needs to be taught,” he said.

A lesson that he believes is more about history then racism.

“I'm saddened that flag was used as a representation of his hate towards a group of people,” he said.