Clashes break out in Minnesota amid nationwide protests of police violence 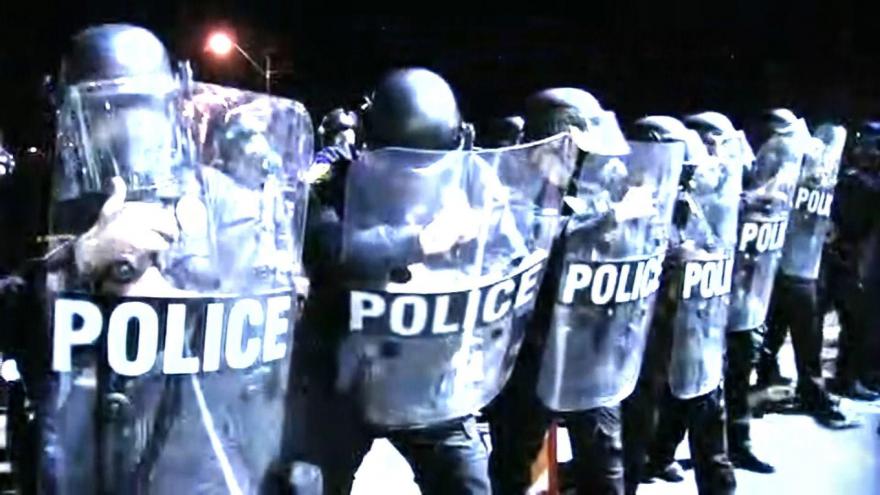 (CNN) -- Tensions flared up in Minnesota as throngs took to the streets nationwide in another night of protests against the police shootings of two black men in Louisiana and Minnesota.

While many of the demonstrations remained peaceful, scuffles broke out overnight Saturday in St. Paul, Minnesota, where protesters clashed with police on Interstate 94.

The unrest happened just miles from where Philando Castile, one of the victims, was shot by police.

At least five officers were injured by protesters -- one hit with a glass bottle and another by fireworks, according to St. Paul police. One was hit on the head with a large piece of concrete, possibly dropped from a bridge, according to police.

Another officer had been hit in the head with a rock, though it is unclear the extent of the injuries.

Police also say a Molotov cocktail was thrown at officers.

As many as 200 people forced their way past Minnesota state patrol troopers who were trying to block them from getting on the road.

Elsewhere, protests in downtown Chicago resulted in three arrests, with pending charges, according to police.

The same week the two men were killed, a gunman killed five police officers at a Black Lives Matter rally in Dallas on Thursday.

Three other shootings, in Tennessee, Missouri and Georgia, endangered police around the same time.

In Washington, a group marched peacefully through downtown Saturday night, chanting, "We young. We strong. We marching all night on." They temporarily shut down Rock Creek Parkway.

About 400 people covered a city block as marchers moved across a large area of northwest Washington and headed toward the Georgetown neighborhood.

It was the third night of marches in the nation's capital.

Marchers included a mixed-race couple carrying a sign that said, "Injustice anywhere threatens justice everywhere," and a little girl with her parents, wearing a white tank-top with the words "My life matters" written on it in marker.

Eugene Puryear, the march organizer, said the shooting of five police officers in Dallas on Thursday was tragic but inevitable because of police violence against African-Americans.

In Atlanta, a group of protesters confronted police over Interstates 75 and 85, then moved into the Midtown business district.

Marchers also took to the streets Saturday night in Miami, with police saying Interstate 395 was shut down for a brief period. A reporter for CNN affiliate WPLG tweeted that demonstrators had blocked a major thoroughfare.

In Fort Lauderdale, Florida, a large group of Black Lives Matter supporters walked to the Broward County Courthouse and then the county jail, where prisoners heard their shouts and tapped on windows in response, WPLG reported.

Their deaths -- along with those of several African-Americans before them -- spurred anger and debate over the use of force by police and questions over racial profiling.

After a sniper killed five police officers during a demonstration in Dallas on Thursday, Black Lives Matter protesters condemned the attack, calling it a tragedy not just for those affected but also for the nation.

"Black activists have raised the call for an end to violence, not an escalation of it. (Thursday's) attack was the result of the actions of a lone gunman," the group said in a statement.

"To assign the actions of one person to an entire movement is dangerous and irresponsible. We continue our efforts to bring about a better world for all of us."