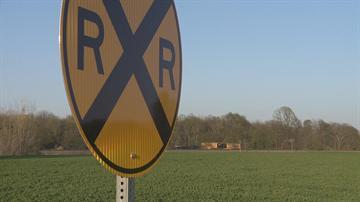 NOBLE COUNTY, Ind. – The plumes of hazardous and foul-smelling smoke are no longer billowing out of the scene of Tuesday morning’s train derailment outside of Ligonier after efforts to smother burning sulfur were successful.

Whipping and unpredictable winds hampered clean-up effort on Tuesday as the cloud of sulfur dioxide billowing out from the burning cars changed direction throughout the day.  More homes were evacuated to the east of the site and the evacuation zone was expanded.

A West Noble School Corporation bus ended up driving through a cloud of the smoke that had suddenly covered the road, it’s estimated the bus and the children inside were exposed to the fumes for around 30-seconds.

"I think it just caught them off guard that all of a sudden the cloud, instead of going straight up, it started moving across the ground instead," explained Superintendent Dennis VanDuyne.  "Three students were sent home, called their parents; the others didn't feel like it was necessary to go home."

The children were affected with chest and eye irritation, the common symptom being reported after exposure to the sulfur smoke.  Norfolk Southern Railroad is advising anyone with concerns about exposure to the smoke to seek medical attention.

The efforts to smother the burning sulfur inside of some of the boxcars by burying them in dirt were successful, allowing crews to move in and start cleaning.  Though, the work to clear out the train cars possibly created more contamination.

“During the activities where we were moving one of the sulfur cars, the car itself breached and additional sulfur ran out of the tanker,” explained Rob Elstro of the Indiana Department of Environmental Management (IDEM).  “We do not have estimates on the amount of quantity in the sulfur car that breached; it was a large breach so we know that it was a significant volume.”

With the hazardous smoke no longer rising from the wrecked cars, Wednesday was the first day crews were able to get close and inspect the damage done to the cars carrying sulfur.  As a result of the delay in inspections, it wasn’t clear how much additional contamination the breach in the car may have caused.

“There isn’t a solid estimate on exactly which cars were breached during the first leak and the first spill so I don’t have an estimate on the number of cars,” Rob Elstro explained.  “I just know there were a total of nine cars carrying sulfur and at least one of them leaked and that one may be the same one that breached.”

According to Elstro, the additional sulfur leaks were also covered with dirt which allowed crews to clean up the spill.
As the sunset on Wednesday, trains pulled down the tracks towards the derailment site carrying supplies to repair the tracks, the wrecked cars were pulled off the rails and the work began to allow trains to travel the tracks again.

Though the fires are out, evacuation orders were still in place late Wednesday night and into Thursday morning.  Environmental contractors with Norfolk Southern and the Indiana Department of Natural Resources continue to test air and water quality.  Efforts also continue to determine what, if any, impact the spill of hazardous materials has had on the environment.