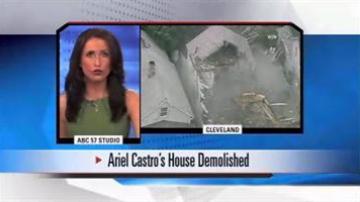 CLEVELAND — The Cleveland home where Ariel Castro held three women captive for more than a decade is no more.

One of Castro's victims, Michelle Knight, was on hand.

She led onlookers in a release of balloons, which she said represented children who have not been found.

"This is for the missing children," said Knight. "Nobody was there for me when I was missing and I want the people out there to know including the mothers that they can have strength, they can have hope — and their child will come back."

Castro was sentenced to life in prison plus 1,000 years for charges including murder and kidnapping.