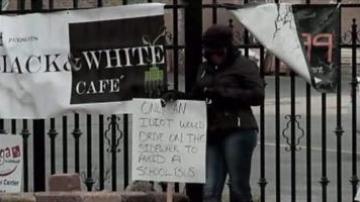 CLEVELAND – A woman caught passing a stopped school bus by driving on a sidewalk received an embarrassing punishment.

A Cleveland judge ordered the 32-year-old woman to stand along the street with a sign that reads “only an idiot would drive on a sidewalk to avoid the school bus.”

A bus driver caught the woman on camera driving on the sidewalk to avoid the bus.

The sidewalk is also the entrance to a day care center.

The driver had her license suspended for 30 days.