Climate change and extreme rainfall a growing concern for Michiana

Extreme weather is not unusual for Michiana. We’ve had heat waves, blizzards, tornadoes and floods. All these events and every day in-between make up our climate record. For South Bend, our longest regional data site, that record goes back to the late 1800s.

Climate is the long term status quo of weather. It’s the baseline for what we quantify extremes and normals. For example 83° is the typical normal high for a summer day in South Bend, 83° is also the record high for October 23rd (1963). This makes sense because we expect it to be warmer in summer than it is in fall.

We can look at the same averages and extremes for precipitation. 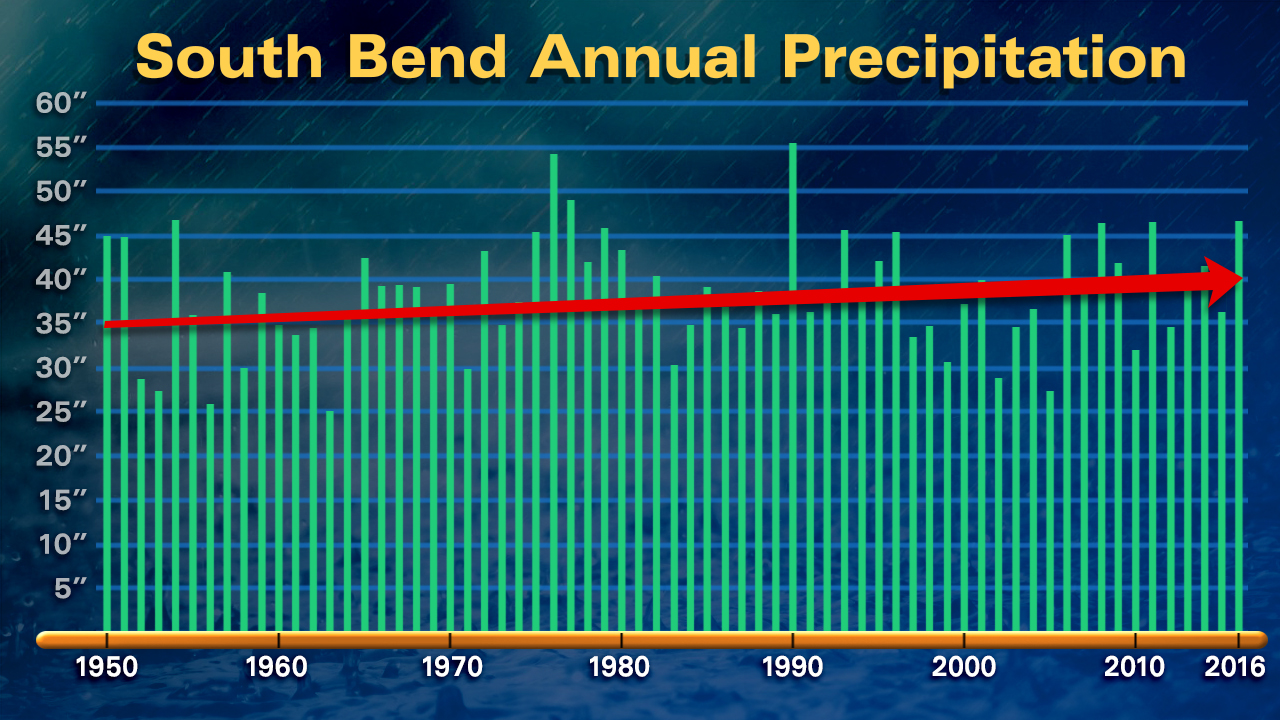 Notice there are some dry years and wet years, including some drought in the 80s and early 2000s but the overall trend is up.

For that to happen it means it’s raining less often but when it does, we are getting more rain. This is a long term trend we look for as a possible sign of impacts of climate change. 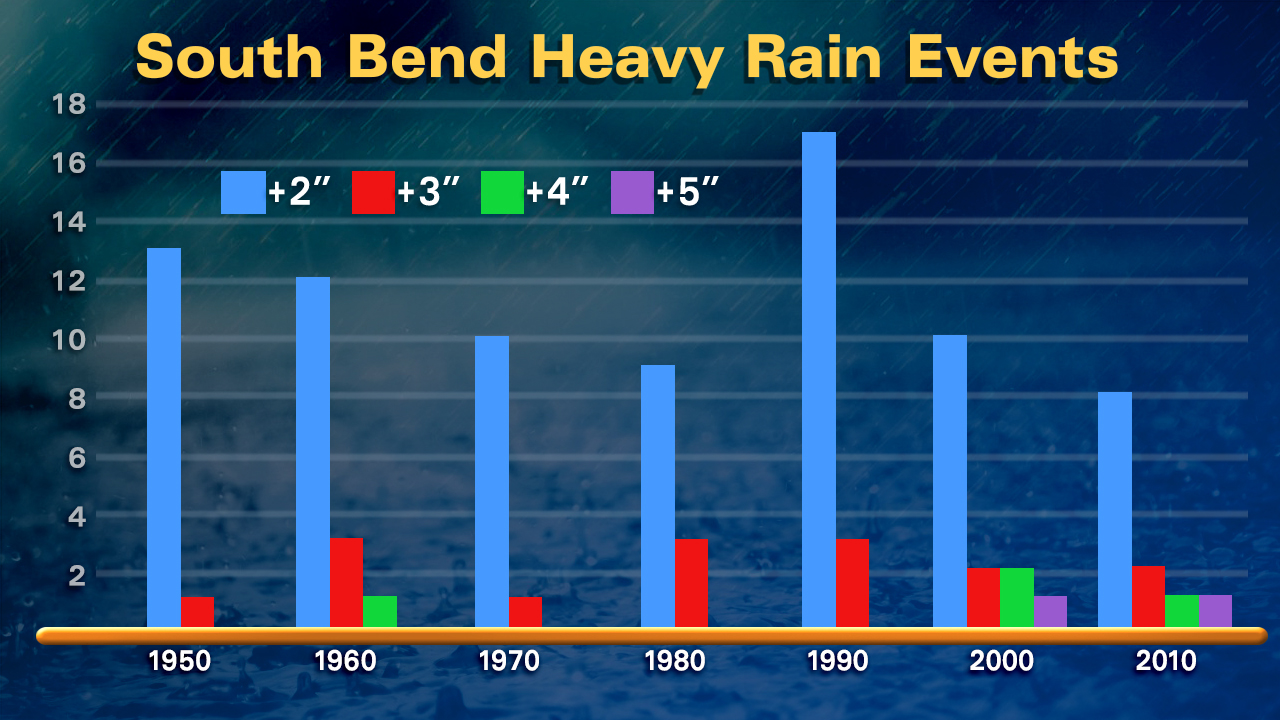 Extreme rainfall events are supposed to be pretty rare. A 1/500 or 1/1000 rainfall means just that, the odds of that happening should be low. However as we look back at heavy rain events since 1950, the 2” events have fluctuated but 3, 4 and even 5 inch events have really increased, especially since 2000. These events are happening more than once a decade, instead of once a century or millennia. 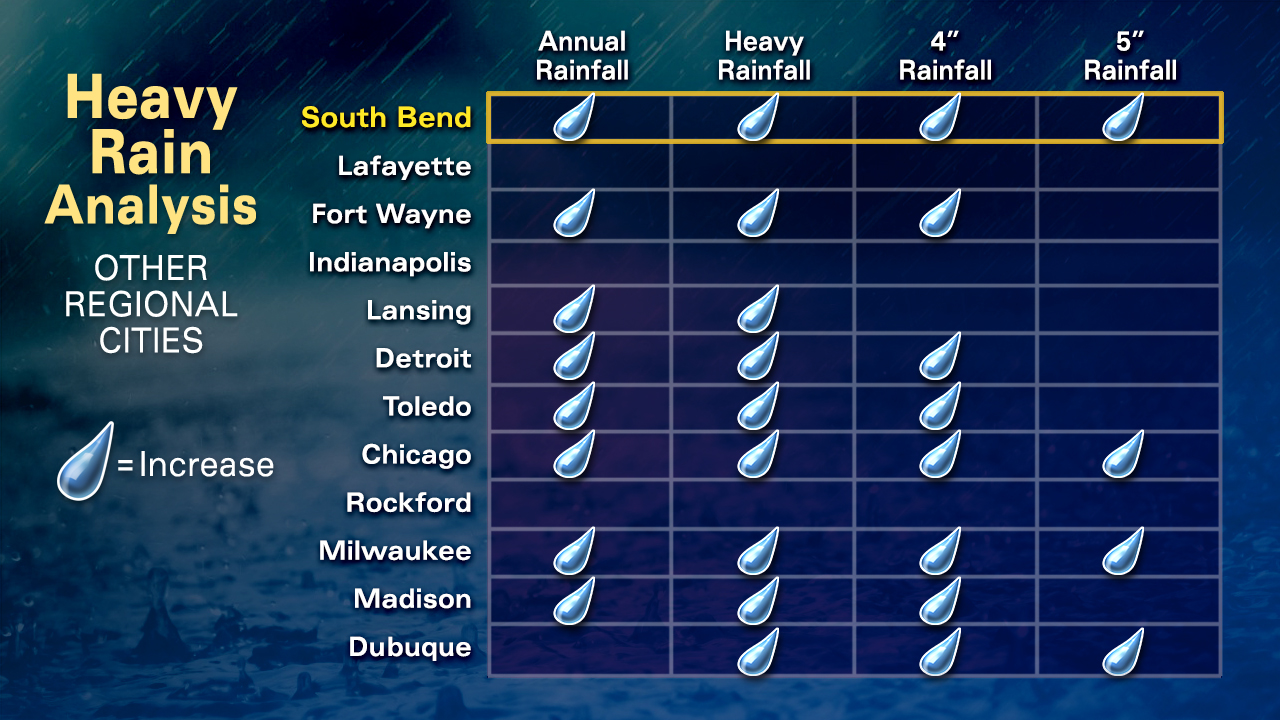 So this is not an isolated thing, and this is just looking at regional sites with a long climate records. Think of the places just this year that fell in between; Southern Wisconsin, Central and Northern Indiana this summer. 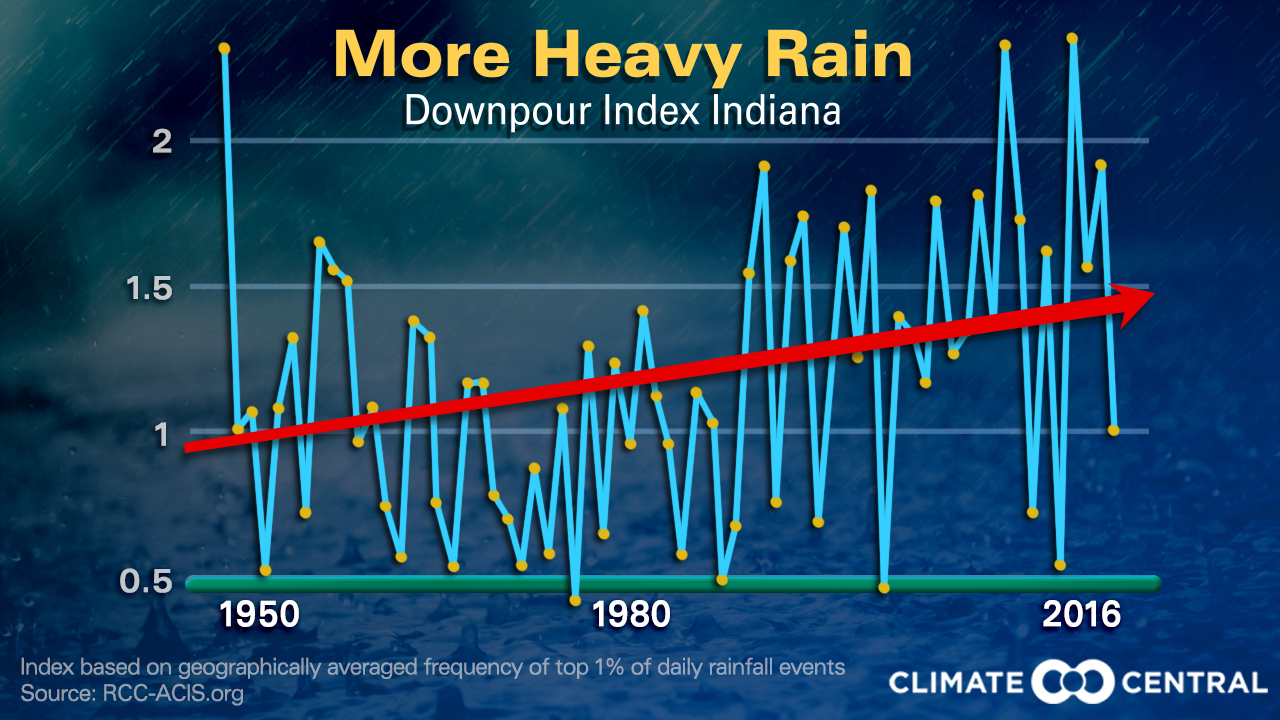 The results of another study done by Climate Central use different methodology but similar result, it looks at the top 1% of rain events. This shows a sharper increase in heavy rain events for Indiana. Notice again a sharp rise towards the 2000s. 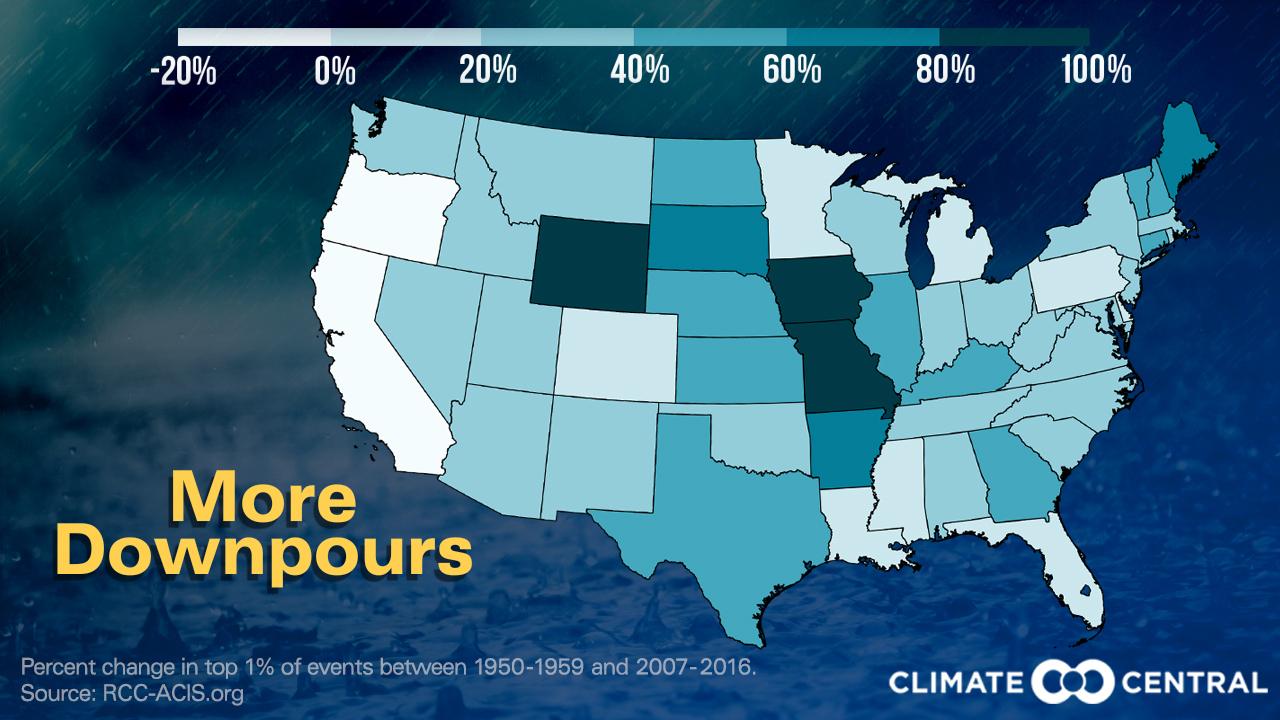 Here's the same study done across the lower 48 of the U.S. Almost every state has seen a 20% or more increase in heavy downpours. This is more than just a fluke in the weather pattern this is Climate Change. Long term trends that we have taken for granted are changing and becoming less predictable to the standard norm and becoming more extreme.

Why would a warmer climate mean heavier rain? With a warmer climate comes a warmer atmosphere, warmer air can evaporate more water. That water just doesn’t disappear; it’s all around us, that stifling humidity in the summer and the fuel for heavy rains.

What goes up… must come down. The more perceptible water we put into the atmosphere, the greater the potential we have for more frequent heavy rain events that were once rare but now seem to be happening more regularly.

Heavy rain events appear to be on the rise, especially over the past decade. This can be in part because we have more sites and ways to record these events. However the increased frequency and amount of rain is alarming. It's starting to shift our statistical extremes of what might be a 1/1000 type event.

Climate change is real and this is just one of the impacts, and may be one of the bigger impacts for Michiana and something we need to be prepared for even in the near future.

Data for this special was compiled from the Midwestern Regional Data Center and Climate Central. Also a special thanks to staff at the National Weather Service of Northern Indiana for additional guidance and information.

A South Bend family is still battling the flood's aftermath

A look back at the Michiana's Historic Flooding

How powerful flood waters can be