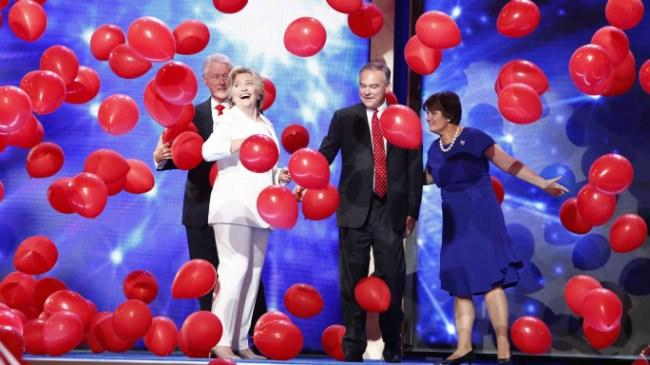 Their target audience: white working-class voters who make up the core of Republican nominee Donald Trump's base.

In their first campaign rally after this week's Democratic National Convention, joined by their spouses, Bill Clinton and Anne Holton, Clinton and Kaine vowed that their policies would would create jobs and raise wages as they cast Trump as a "You're Fired" president.

Making a direct pitch to lower-income and middle-class Americans, Clinton pledged to focus on areas of the country "left out and left behind," and "places hollowed out by plant closures."

"We've got work to do. I'm not satisfied with the status quo. I'm not telling you everything is peachy keen. I'm telling you we've made progress but we have work to do," Clinton said. "We've got to make this economy work for everyone -- not just those at the top."

Kaine, who introduced Clinton, described the former secretary of state as someone who "knows how to battle and get things done for regular people."

"Don't you want a president who knows how to battle and get things done for regular people?" Kaine said as he introduced Clinton. "So that's what we'll do over the next couple of days: We'll talk about creating jobs, we'll talk about raising wages, we'll talk about the leadership that America needs to play in the world."

Over the next 72 hours, the duo will drive through cities like Harrisburg, Pennsylvania; Pittsburgh; and Youngstown, Ohio, cramming in multiple rallies and retail stops each day.

After touring the company, Clinton and Kaine spoke to voters on the factory floor surrounded by large machinery and injection molding presses. They pointed to K'NEX as a model company that honors the "Made in America" motto.

"We know that if we're smart about it, we can bring jobs back from China and other places if we make up our minds to do that, just like that's happened here," Clinton said.

"When someone runs for president and says their primary qualificaitno for being president is because they claim to be a successful businessman, then it's only fair to ask how did you become successful?" she said. "We don't resent success in America but we do resent people who take advantage of others."

The primary focus of the bus tour is jobs and the economy, including a plan for the first 100 days of a Clinton-Kaine administration. The decision to campaign through this region right out of the Democratic convention sets up the Rust Belt to be one of the epicenters of the general election.

The three-day trip will highlight the campaign's strategy of reaching out to Republican voters and targeting GOP-leaning areas as it looks to woo rural working-class white voters central to Trump's base.

The bus tour will also serve as an important opportunity for Kaine to introduce himself to the country, particularly to voters who know little about the former Virginia governor.

Elaine Gelb, a real estate manager from Philadelphia, said although she didn't view Kaine as an "exciting" pick, the senator appeared to be a good match and political partner for Clinton.

"I think she picked somebody who's a lot like Joe Biden, who's a nice complement, sort of a soft, easy-going kind of guy," Gelb, 60, said. "I wouldn't say he's exciting and I don't think too many people have heard of him, so we have to learn who he is."

Tom Goodwin of Titusville, Florida, said he sees 2016 as the most important election for the Democratic Party as it confronts a "dangerous" GOP nominee. In Philadelphia for the summer to help take care of his grandchild, Goodwin said he hopes to see Clinton and Kaine continue to draw out the contrasting visions of the two parties as they hit the road this weekend.

"What I heard last night and over the last couple of days at the Democratic convention was exactly the right note. It was such a contrast to the Republican message. It was so much more uplifting," Goodwin said.

CNN's Dan Merica and Betsy Klein contributed to this report.