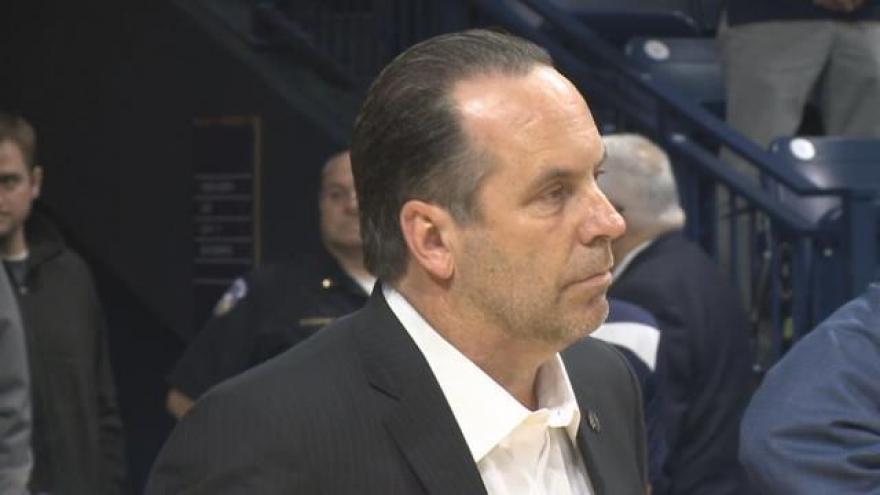 The Irish and Cardinals have had quite the history over the years with some epic match-ups. In 2013 the two competed in the longest regular season game in Big East conference history.

That is just one of the memorable experiences that connects Notre Dame Head Coach Mike Brey and Louisville Head Coach Rick Pitino.

"We've had great games with Louisville, I mean the 5 overtime game here, it seems like every other game is an overtime game," Coach Brey said.

That game linked Brey and Pitino in the record books, but their connection actually began more than 30 years ago.

"It's funny, Coach Pitino, Rick Pitino coached me at the 5-Star basketball camp when I was a rising senior at DeMatha High School," Coach Brey said.

Pitino was a young assistant coach at Hawaii when he took a summer job coaching a high school camp back on his native east coast.

"I coached him at camp and we won the championship. He was a good little guard, played really, really hard and I always say my camp was doing an unbelievable job," said Coach Pitino.

"Yeah, fiery, a lot of energy man. He was great. He was great to play for, you loved playing for him," Coach Brey said.

Pitino has won national championships at Kentucky and Louisville.

"He had a special energy and he really had a special feel for the game, so I don't think I was ever surprised to see him have the success that he's had," Coach Brey said.

Pitino could easily say the same about that rising high school star turned Irish head coach. If anything, Brey is a good listener. It helps if the guy who is talking is a legend.

"It's always nice to sit with a veteran guy on the road in the summer and maybe a guy says to you, 'Hey, you keep doing that. I like what you're doing with your program.' It gives you a lot of confidence," Coach Brey said.

Brey has turned that confidence into a quest, taking Notre Dame to the NCAA tournament 11 times, including back-to-back trips to the Elite Eight.

"The funny thing now is, I'm the old guy who says that to the young coaches," Coach Brey said.

Now they match-up as two of the nation's most successful coaches once again can fans expect another epic battle?

"What I love about Mike Brey, not only does he do an incredible job of coaching, he has fun coaching on the sidelines. We lost to them in 5 overtimes, I was ready to have a nervous breakdown and he's clapping every overtime, like let's play ten. I wanted to kill myself," Coach Pitino said.

"Rick Pitino and I tease about it in the summers, 'How many overtime games are we going to play?' Coach Brey said.

If it happens again, this time Pitino is ready.

"I told the team, we have to play against 6 guys at Notre Dame coming up. Everyone thinks that's the referees, I said, 'No. They always have God on their side. They always make these comebacks and you know, they pray harder.' I told our guys we're going to church every single day, we're not going to let them match us in church," Coach Pitino said.