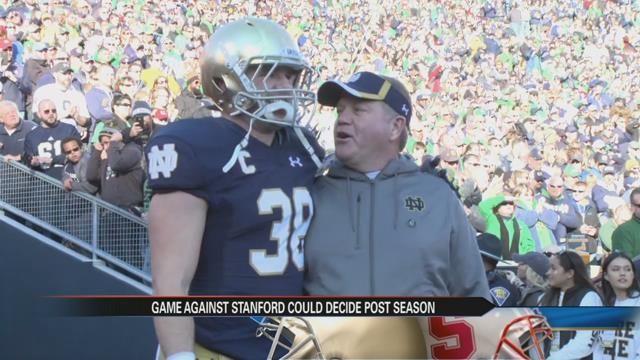 It's a game that's been pegged as a postseason decider for the Irish since the preseason. And now this week, Notre Dame will face off with Stanford to potentially solidify their playoff hopes.

Notre Dame is limping to the finish, with a 'too close for comfort' win against Boston College last week and the loss of stars on both sides of the ball. CJ Prosise is day-to-day after an ankle injury. And KeiVarae Russell has completed surgery for a fractured tibia. But coach Kelly says the team has a renewed sense of energy. And they will need it against a surging Stanford team.

"It's an opportunity to do be part of something that hasn’t happened here before," said Notre Dame Head Coach Brian Kelly.

The golden domers know that if they want to make the college football playoff, they have to beat Stanford on Saturday. And that will be no easy task.

"They are a very good football team," said Kelly. "Well coached football team. Obviously David Shaw, one of the best coaches in America. He will do a great job preparing his team."

The Irish defense will have its hands full with quarterback Kevin Hogan.

"A guy that's won a lot of football games for them," said Kelly. "We know him. Tough guy who can rise to the occasion and make plays when necessary."

"He's a game wrecker. He's a guy that can influence the game in special teams. Catching the ball coming out of the backfield."

The stage is set for the top 15 matchup.

"It's going to be a great challenge for our football team and we are looking forward to it this coming weekend," said Kelly.

The Irish haven't won at Stanford stadium since 2007. They will look to break the losing streak this Saturday.