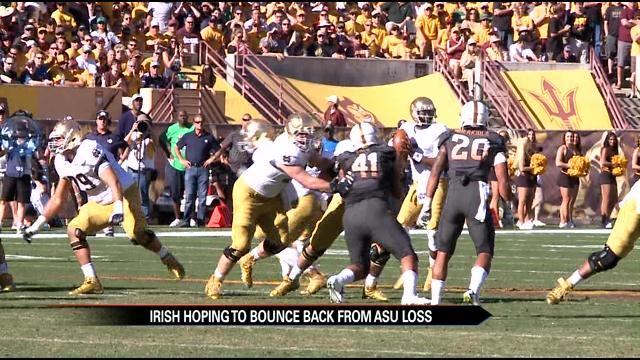 After Saturday's tough loss to Arizona State University, the Fighting Irish are back on the practice field and are hoping to bounce back.

On Tuesday, Coach Brian Kelly met with the media to talk about the Northwestern game, saying they are working to fix the mistakes made on Saturday.

During Saturday's game, quarterback Everett Golson had five turnovers that cost the Irish the game.

Kelly says that Golson is taking full responsibility for the loss, but the Irish have a lot to work on as a team to improve.

Some fans wonder why backup quarterback Malik Zaire was able to get playing time at the end of the fourth quarter.

Kelly responded, saying the decision was to protect his starting quarterback.

Notre Dame will take on the 3-6 Northwestern Wildcats Saturday at Notre Dame Stadium.