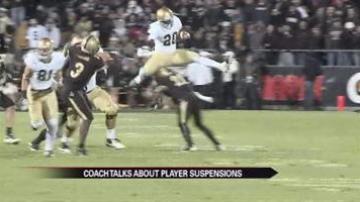 Coach Kelly shed little light on the violations, but emphasized that the suspensions should serve as a learning experience for the players.

"Well I think we all get disppointed," said Kelly of his players. "But, we also know that they're young and we want them to learn from the mistakes that they've made."

With just four days until the season opener, Coach Kelly is without eight of his top players-- half due to suspensions.

"So, when we suspend somebody, I look at it in terms of how are we going to get this young man to live up to the expectations," said Kelly.

It's a punishment Kelly has used before of varying severity.

Michael Floyd was suspended from team activities but reinstated last season before the first game.

But, Carlo Calabrese and Tommy Reese are both serving a one game suspension this season after being arrested in the spring. The pair will not travel to Doublin, Ireland with the team for the season opener.

Now, Wood and Utupo will be sitting out for the first two games of the season-- including the home opener against Purdue.

Despite being down players, Kelly does not see the suspended players' absences as an obstacle to overcome.