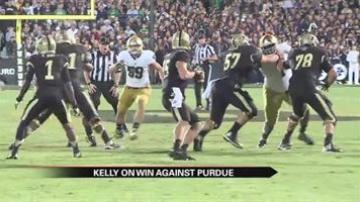 WEST LAFAYETTE, Ind. --- Even though the Irish got off to a slow start against the Boilermakers, they were able to pull through with their second win of the seson in the second half.

Saturday night's final score was 31-24 bringing the Fighting Irish to 2-1 on the season.

Head Coach Brian Kelly has said all week his guys have been confident enough to bounce back after a loss to Michigan last week.

He addressed the media about last night's win in his weekly conference call Sunday.

"What I liked about the game is that we showed some great resolve in the second half and came back on the road and won a football game and learned that we had to make the plays in the second half from not making them the week before," said Kelly.