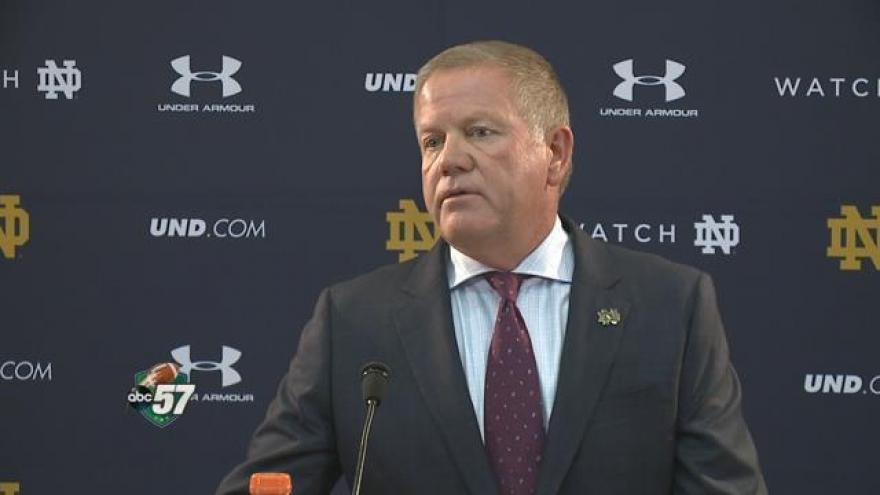 Notre Dame is 1-and-0 against Nevada all-time. The last time these two teams played, in 2009, Wolf Pack current Head Coach Brian Polian was an assistant under Charlie Weis for the Irish.

Notre Dame won that game 35-to-nothing, but that was a long time ago so what's it going to take for Notre Dame to beat Nevada?

The Wolf Pack is coming off a 30-27 overtime win against Cal Poly last week.

"Brian Polian is very familiar with Notre Dame and Power Five football, and he's got some players on offense that could play for a number of Power Five teams, and he's got a great wide receiving core, deep in balance and great size. Butler at running back does a really good job running downhill, and Stewart is extremely efficient at the quarterback position. Last week he threw for 72-percent," said Coach Kelly.

Tyler Stewart passed for 189 yards and two touchdowns, while runningback James Butler rushed for 123 yards surpassing 2100 yards for his career.

Tim Cramsey is the new offensive coordinator for the Wolf Pack this season and Kelly says he thinks outside the box.

"I think in two games we saw, we saw about 15 to 18 different formation groupings and very creative mind," said Coach Kelly.

At the end of the day, Coach Kelly says his team just needs to execute better and wrap them up.

"So we'll spend more time on tackling, but we expect that the tackling will get better and better as our guys settle into it defensively," said Coach Kelly.
The wolf pack defense held the opponent to just 62 passing yards. While Kelly is giving the team credit, Nevada did give up 383 yards on the ground.

"There is no holes or real areas that you could take advantage of. They're just a solid, fundamentally-coached defense, which you would expect from a Coach Polian team. They're sound in special teams. They got two veteran kickers. Again, a team that went to a bowl game last year and certainly one that was picked to finish in the top of their league and we will have to play well against them," Coach Kelly said.