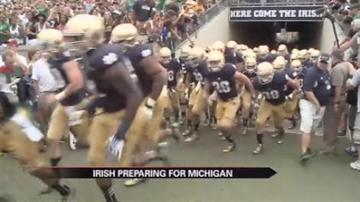 NOTRE DAME, Ind. -- The Irish easily beat Temple Saturday, but are they ready to play Michigan next Saturday? Notre Dame Head Coach Brian Kelly says the game against Michigan will be a tough one.

Saturday's win over Temple gave Notre Dame a victory for its home opener for the fifth time in six years.

Coach Kelly says he is happy with Notre Dame's win over Temple, and adds he was able to play ten freshmen in the season opener.

"You look at any one of those freshmen that were out there and I think they benefited a great deal," says Coach Kelly. "I wouldn't single out one guy as much as all those guys are going to be able to contribute as this season unfolds because it is going to be a long, tough season and we are going to need them all."

After a 28-6 win over Temple, Coach Kelly is pleased but ready to work harder.

"Our kids are motivated from not only wanting to get better from one week until the next, but certainly wanting to play their very best against Michigan," says Kelly.  "That is going to be the motivator for us, wanting to be better from week one to week two."

Notre Dame will take on Michigan next week in Ann Arbor. It will be the team's first real test of the season.

"This is going to be a really hard fought and high profile game," says Kelly.

And looking at the Irish defense's performance Saturday, Coach Kelly says there is still room for improvement before next weekend.

ABC 57 will be traveling to Ann Arbor for the matchup and will have full coverage.