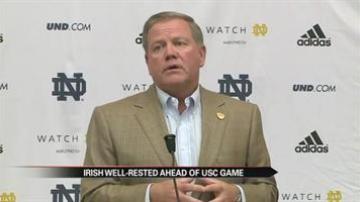 SOUTH BEND, Ind. -- The Irish are rested and ready to take on USC at Notre Dame Stadium. Head Coach Brian Kelly previewed this week's matchup in a press conference Tuesday.

USC is coming off a 38-31 win against Arizona last week and Coach Kelly is anticipating an aggressive team that he says plays with a lot of energy and enthusiasm.

Kelly says the USC-Notre Dame game is one his team looks forward to each and every season.

"I think our players will be the first ones to admit that this is our rivalry game.  This is our game that we look forward to against USC," said Head Coach Brian Kelly.

Both teams come into this weekend's matchup with four wins and two losses on the season.

The Irish defense is taking this week to get ready for a run-heavy Trojan offense that's good at hitting the ground running.

"It's a very talented offense, one that can score a lot of points. Again, playing with the way they played against Arizona, a lot of energy," said Kelly.

A defense the Irish are familiar with.

"Some veteran players on defense, we've seen Dion Bailey quite a bit. Pullard has been around, a very good football player. Kennard off the edge is a very difficult guy to block," said Kelly.

Orgeron is looking for his first win on the road.

"Ed is a veteran football coach. He's been a head coach. He's certainly somebody that is familiar with all of his players. He's got them playing with a lot of energy, a lot of enthusiasm," said Kelly.

That doesn't mean Coach Kelly expects a new and different team in USC.

"Like I said, Coach Orgeron has been around. He's a veteran college football coach. He's not going to go in there and scuttle the offense and defense and special teams," said Kelly.

Coming off a bye week-the Irish are rested and focused.

"Our guys, their minds are clear and focused. We're feeling pretty good about ourselves and our preparation, and we're really focused on playing well Saturday against USC," said Kelly.

Coach Kelly is 13-2 coming off of a bye week so he'll be looking for that 14th win this weekend.