Coach Kelly says Michigan game will be a great match 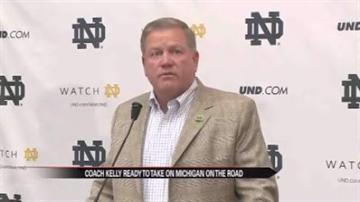 SOUTH BEND, Ind. -- In a press conference with Notre Dame Head Coach Brian Kelly about this weekend's game against Michigan, the coach acknowledged the big rivalry between the Irish and the Wolverines. He also said the game will be a great matchup against a talented team and wants his players to stay focused and build off last week's win.

"This is a great and historic rivalry, so let's get that out of the way right away so we don't have to answer any more questions about this rivalry. We're excited about the game, excited about playing it," said Coach Kelly.

The Irish are making their last scheduled trip to the Big House this weekend-one of the toughest stadiums to play. They're hoping the outcome is better than the last time they played in Ann Arbor. They lost 35-31.

"[It will] be a great matchup, we were there two years ago and obviously very disappointed with the outcome. It's a great atmosphere. It should be a great football game," said Coach Kelly.

Kelly says Michigan boasts depth and has one of the best linemen in the country, making for a powerful offense.

"A number of running backs led by Toussaint, who's a veteran, and obviously one of the best if not the best offensive linemen in Taylor Lewan on the offensive line. A lot of offensive players, great depth," said Kelly.

But Kelly's also prepared for a few challenges from the Wolverines' defense-which he's anticipating will get very physical.

"Defensively, they do a lot of things. They'll bring pressures, they give you multiple looks. They're difficult to defend," said Coach Kelly.

Coach Kelly also talked about his younger players getting some playing time in against Temple and he says he plans to play them again this weekend.