Coach Kelly says Saturday's game will be toughest so far 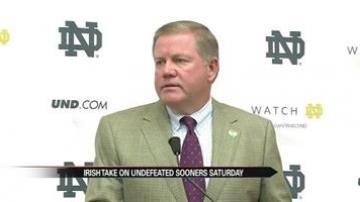 SOUTH BEND, Ind. -- Notre Dame Head Coach Brian Kelly spoke about the team's close wins over the last few games. Kelly said although Saturday's game will be the toughest so far this season, if the team plays at its full potential - they will win.

The team's ability to consistently win close games has many fans wondering if they can pull it off again against number 14-ranked and undefeated Oklahoma.

Coach Kelly said his guys believe they can win under any circumstance.

"We've won a lot of football games, 15 out of the last 16 games, ten in a row at home. Those things all go towards that belief that they can win," said Coach Kelly.

Kelly says it hasn't been his intention to play neck and neck with his opponents this season.

"It's not one of my personality traits to play tight. We're always talking about being more aggressive and playing loose," said Kelly.

One year ago, the Irish went to Norman as the underdogs and proved they could fight. They won 30-13 over the Sooners.

In order to have a repeat of that success, Kelly says they're going to have to play aggressively against a team that has a lot of depth.

"The way we play right now, we can't afford to not let it go. If we go and we play tentative, that's not going to be enough for us to win football games," said Kelly.

Both the players and Coach Kelly have said they haven't reached their full potential as a team-and they say playing teams like Michigan and Michigan State give them the opportunities to better their game.

"Our guys are not finished products and the challenges they get from playing the schedule that we do, allows them to grow as players," said Kelly.